The Call of Water

For as long as humankind has created tools, it has gone to the sea for sustenance. From the first brave soul to crack an oyster to the industrial bottom trawlers that violently rake the seafloor, our drive to eat the sea has always existed. But the purest form of fishing has to be the adventurous sport angler. Freshwater, saltwater, deep water trawling, river missions, fly fishing, and surf casting. With nets, multifilament line, complicated secret hand-tied flies and trendy lures, flashers and buzz bombs and other accoutrement, we take to the water with hopes of bringing home fish for the family, but is that really why we do it? I don’t think so.

The allure of a life on the water has so much more to do than food on the table, and it begins with the boat. Any vessel, from a humble inflatable to the standard cabin cruiser to the welded aluminum beauties built specifically for these rocky coasts, boats are our lifeline on the everchanging waterscapes we play on. Just investing in a boat–which may as well be an acronym for “Break Out Another Thousand”—is a financial and maintenance commitment to begin with. But mannnnnn, once you leave the dock, slowly motor out of Tofino Inlet, and then pin the throttle out past the shallow sandbar, the world opens up in a way no land-shackled citizen could ever truly understand. In fact, most fishers will tell you it’s the boat that affords them the solace that drives their search for fish. On the ocean, the land can fall out of sight quickly and leave you feeling small in the world, a prerequisite experience for any thinking person. An angler on the grand ocean is a humble human. They intrinsically know nature has the last say, and they respect what that means: bow down, tiny human, I’m in charge. 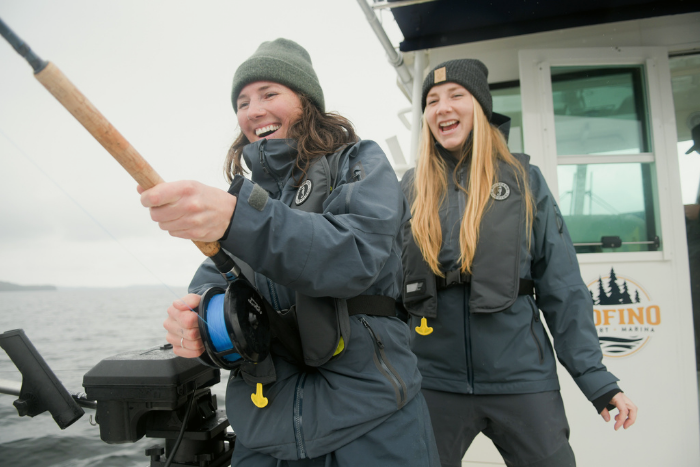 Of course, the ocean provides feeling, not just food. When you’re on the water, a gentle breeze blowing across tight lines, sun casting shadows across the deck, the emotions that course through you become overwhelmingly positive. You feel alive. Invigorated by the salt in the air and the sun on the sea. Birds remind you land is within reach. Whales show where the fish are. You become part of the greater ocean family, all seeking a fresh, salty meal. 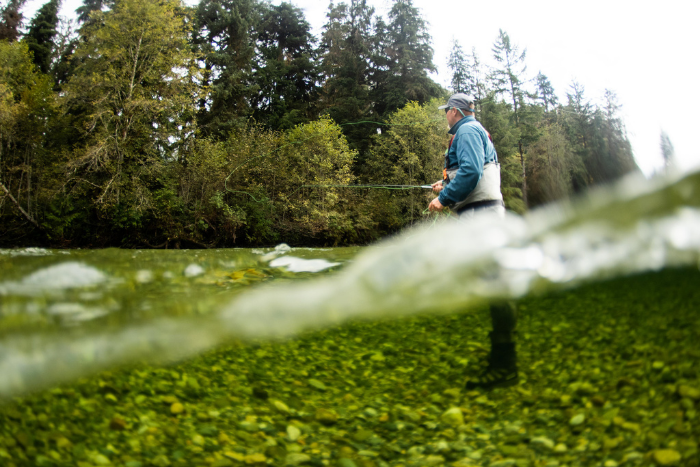 It’s not just the saltchuk that calls to fishermen. Freshwater is a favourite for many, especially salmon hunters and those who swing wide graceful arcs of line in that elegant art called fly fishing. Up the many rivers that feed the coast with millions of salmon annually, men and women waist-deep in gently running water on slippery boulders, patiently watching for the eddies that form under woody riverbanks and the bugs that buzz the water’s surface. B.C.’s rivers are a special treat unto themselves, with crystal clear water framed by emerald green rainforest. Gentle bears and majestic eagles stop by occasionally to check your progress. And you probably haven’t had much luck. Fly fishing is damn hard, a lesson in humility that lasts a lifetime. Even the best regularly get skunked. And yet we continue. Because as the old joke goes, there’s a reason it’s called fishing, not catching. Yes, what awaits us in the water can feed our friends and family, but in truth, it mostly feeds our souls. – Mike Berard