When you arrive at Tofino Resort + Marina’s Marine Adventure Centre, the first thing you notice is that the building is, like, literally on the water. It sits on a pier, and looks out over the stunning Tofino Inlet. The friendly team inside quickly processes your payment (while you get free coffee!) and gets you to sign a waver form, and not long after you are putting on a survival suit. Don’t worry—it’s less severe than it sounds. It just means you’ll float if you ever go in the drink, plus it keeps you warm.

Soon after, Jeff the Skipper introduces himself to us, and we got on the White Raven, a beautiful new aluminum boat that is said to be the fastest in Tofino. Our group shuffles onto the boat and finds their seats. From any spot on the boat, you can see both sides and up front easily. I choose the second to front seat and sit down on the padded bench seats. More comfortable than I thought they would be. Jeff fires up the motors after a quick safety briefing and expertly navigates the craft out of the crowded marina. Dude knows how to move a boat well. 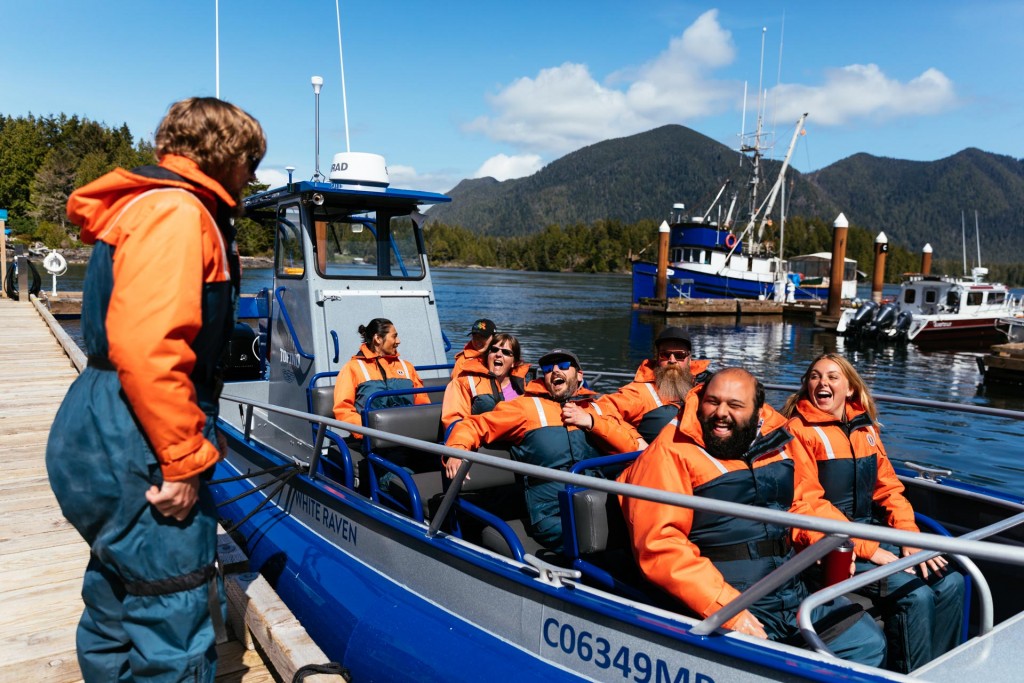 The first stop of interest is only a few minutes away. Tofino’s infamous Strawberry Island has been a photographic icon for decades, with its floating houses and the charismatic wooden ship that has been turned into an on-land home for some industrious local. But today the target is different. Jeff points out an eagle’s nest—called an aerie—high in a tree on the backside of the island, hidden from view. Two eaglets have been standing on the branches for for the first few weeks of their lives, getting used to their wings. We watch as the twitch and shift in the wind, calibrating parts of their bodies that have yet to be used. Soon, they will attempt to jump out of the tree and glide over the water. It’s admirable, scary and inspiring at the same time. Needless to say, the cameras are out and the crowd is happy already.

Once we get enough of the eagles, Jeff hammers the throttle and we get up to plane on the smooth water of the inside passage of Clayoquot Sound. I strap my hat down as the boat is going a good clip. It’s a mildly foggy day but the mountains can all be seen clearly from the ocean we are racing across. We pass Ahousat, the First Nations community that is boat-access only. They have lived in this exact location for many millennia. Jeff steers the boat close to the shore of Vargas Island in hopes of catching the rare sight of the island’s famous wolves. The week before, one was spotted chasing down and taking a deer, the grand, heartbreaking circle of life seen up close and personal. We are not so lucky, but one German guest spots a harbour porpoise breaching off port, so Jeff swings the boat around. About the size of a small human, they are the second smallest cetacean in the world. We are ecstatic to have witnessed a whale so early, even if it is a little guy. We continue into some rocky, broken islands that are stuff full of big, health kelp beds and all the biodiversity that lives in them. We spot a seal and her pup nursing on the rocks. A big sea lion swims through the bobbing heads of kelp. A salmon jumps straight up out of the water, probably narrowly escaping becoming a meal. Rafts and rafts of floating sea otters populate the undulating horizon. These little guys were extirpated from the area when they were hunted down for their furs. But they were reintroduced and the population is now healthier than ever. 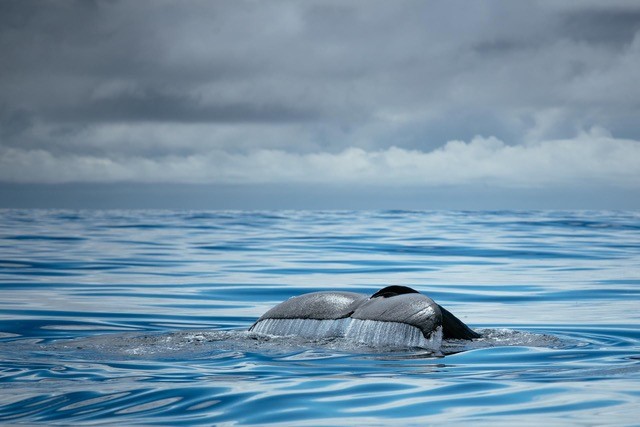 The fog closes in on the boat as we move northwest to where other whale watchers have reported a few sightings on the radio. It begins to feel like an adventure when we hit rough water, the waves growing steadily. Jeff eventually tucks the boat into a cute little protected cove. He explains we are about to hit truly open ocean and that if anyone is feeling ill, they can chill out on this beautiful island and explore the old cabin and trails that exist there from when one hardy family tried to live on this remote coast. They didn’t last long, and moved back to the comfort of Tofino soon thereafter.  No one takes Jeff up on his offer. We all want the whales. The boat does a U turn in the harbour, turns north around the point, and aims towards the open ocean.

The boat we are in is so incredibly powerful. It feels safe in the big waves, and Jeff expertly drives it so as not to allow the boat to get roughed-up by the swell. It’s pretty rad to watch. We all keep our eyes peeled for any sightings. Grey whales, humpbacks and orcas are the most common whales seen around here, but today we are specifically looking for the greys that are here frequently in this season. Then we get the call. There’s one near the shore. As we get closer to the beach, the fog lifts and the sun shines down on us, as if we’ve been destined to meet up with the juvenile grew playing in the surf. I’ve seen whales many times before, but never like this. In only 10-12 feet of water, a smallish grey whale feeds off the sea floor, using its baleen to munch the ocean floor, suck up all the shrimp, shellfish and other animals, and then filter it through its baleen. Push out the silt. Swallow the rest. Jeff tells us researchers have concluded most grey whales are right-“handed” as the majority of baleen plates in their mouths are worn down on that side. Fascinating stuff. 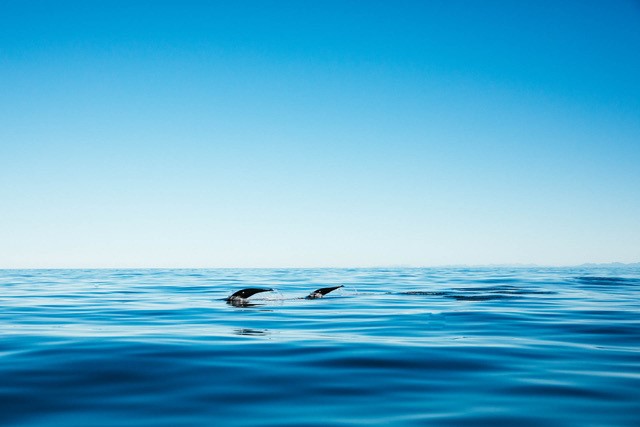 After watching the playful. hungry whale for a half hour, we decide to try and see the larger grey whale spotted out in the open. We are unsuccessful, but decide to head south towards Tofino again. With the tide at our backs, Jeff is able to get the boat up to full speed. The sun comes out, and the glory of the Vancouver Island mountain ranges presents herself in full panoramic beauty. Whale spotting aside, it might be the highlight of the trip, ripping down the coast at full tilt, sun on my face, wind whistling, and keeping an eye out for killer whales in what locals call “Orca Alley.” We see some simply massive sea lions sunning themselves on a rock. One in particular sits up, chest out, and challenges the boat from his stony  Pacific throne. He ain’t afraid. Well, maybe he’s afraid of the orcas that hunt him all around these rocks. They love eating sea lions. 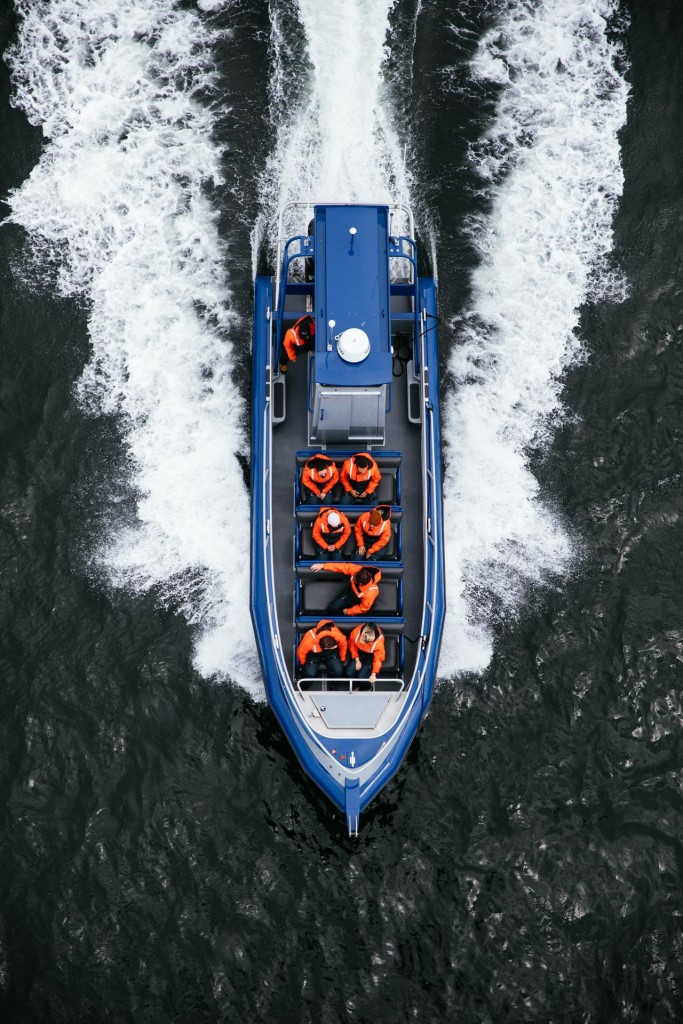 After almost three hours, it’s time to get back to home base. I feel like the experience was so much more than whale watching. Seeing these leviathans of the deep is always rewarding, but having a personal guide like Jeff show you the more nuanced details of flora and fauna of the Pacific Coast is a rare opportunity. The landscapes of the coast dramatically rise out of the horizon and the sea shows you what she is made of. It’s soul-filling stuff that you won’t stop talking about soon after. I’ve said it to many people many times before: don’t assume you know what to expect out there…just go, and do it soon. The earlier in your life you witness the grandeur of the west coast up close and personal, the richer life becomes afterwards. Believe that.