“Good morning, boys!” There’s something about a crisp early AM mission that gets at the core of your spirit. In Tofino—as is the case with almost any adventure worth its salt—morning is the right time to get out there. Our group arrived at the Tofino Resort + Marina dock at 7 AM. Our fishing guide Peter already had the boat’s motor warming up, and with a big smile and a handshake for each of us, he happily invited us aboard as he was putting the finishing touches on the boat. It didn’t take long for Peter to give us the rundown on what we’d be fishing for. Salmon season had just closed, and halibut was yet to open, so we would be looking for lingcod and rockfish. Less than ideal for some of our crew, but honestly most of us just wanted a day on the water, and a great dinner to share amongst our group of three generations of family.

Tofino Resort + Marina has a whole fleet of boats and we were excited to see that ours was a 20’ Grady with a fully enclosed heated cabin and a ballsy 225HP Yamaha outboard motor. This thing was capable of an overnighter…maybe an idea for future trips? Either way, we knew comfort was key to a good day, and we were certainly going to be chilling in comfort. 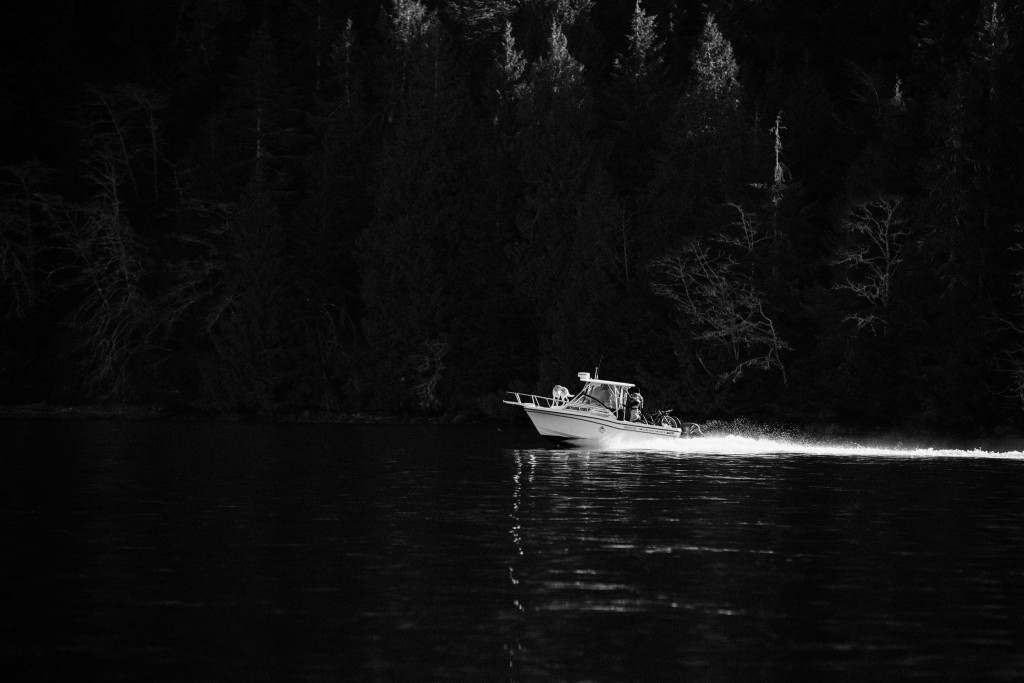 The mist that sat just above the glassy surface of Tofino Inlet looked as iconic as any west coast scene as we motored out slowly in the calm waters of a slack tide. Through the fog, the towering conifers of the forest stood partially concealed in a shroud of thick, dripping moisture. Not far from the docks, Peter pulled up to a red and white buoy floating between a few forested islets and started pulling up on the rope. Soon, he was pulling a crab trap out of the salty water. It was full of big, fat crabs crawling over each other. Peter pulled the legal ones out and threw them in a bucket. The rest went back into the drink. The dinner table was set and we hadn’t even touched our rods yet. My brother was almost drooling. My dad was a commercial fisherman for decades and he smiled wide, as strong an approval as one can get from a stoic old fisherman. 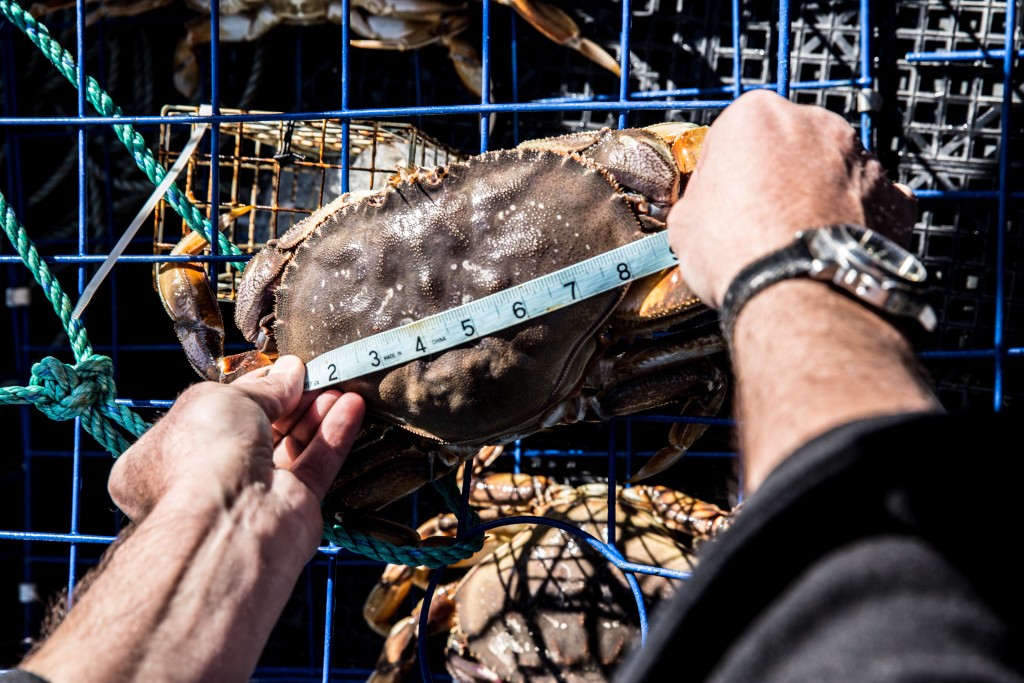 Pete said he knew of a “guaranteed” spot to pull some huge lingcod. Classic talk from a clearly experienced and enthusiastic fishing guide. Before we went, though, he wanted to know how adventurous we felt; would we be down with heading out into open ocean where the water was rougher but the fishing was better? He said if we wanted comfort, there were gentler waters—and smaller fish—if we stayed in calm water. I looked around the boat as all four of us nodded our approval in moving offshore. With a wink of an eye, Pete said there was a rocky, reef seamount that jutted up from the deep ocean floor many kilometres out, but not all the way to the fabled blue water where the big tuna swim. Peter claimed this mysterious hunk of rock was where the big ling hung out. This sort of insider fisherman wisdom is what anglers live for—the local knowledge and the know-how on getting there. We aimed the boat north and readied for rougher waters. Of course, along the way we stayed inside Clayoquot Sound’s protected waters as long as possible, and spotted rafts of sea otters, some stinky-ass sea lions lounging on an outcropping, and even a killer whale’s tall dorsal fin. Transient Orcas hunt the same fish we do here, but they love those loud, fat sea lions the most. 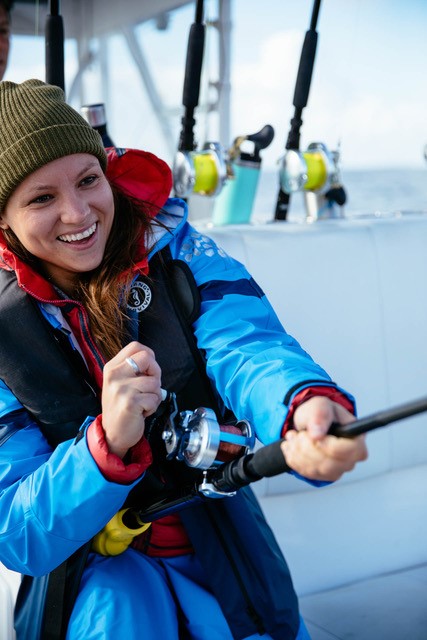 When we left the safety of the islands and the jagged Vancouver Island mountains behind, the water started building. Rollers lifted the boat up and then rushed the boat down the other side, Peter navigated the boat like an old pro, accelerating out of the crest of the wave to lessen the impact, and nosing in at an angle to keep the ride smooth. It was rougher than I expected, but eventually calmed down to a reasonable enough level for us to get the rods wet. As the sea bucked around us, Peter showed us the best technique for pulling lingcods off the rocky terrain they like to hide in; the ol’ lingcod jerk and pull. My dad was an old hand at it, and didn’t need much help as started pulling lingcod in relatively easy. Me, not so much, but Peter was helpful as he showed me patiently again and again. My brother had already caught two ling: one was sizeable but the other was huge. My childhood friend Lance had brought three in. I still hadn’t managed to hook one and the trash talk was beginning to come out at a pretty steady stream from the other side of the boat. Then I got a beautiful, chubby rockfish. And another one. And another one. Then, luck struck hard. I pulled up the biggest lingcod of the day. The trash talk got lost somewhere in the fog at that point.

One of the most impressive things to watch was the sheer expertise of the guide moving around the boat helping each of us pull in all the fish, re-set equipment, keep the boat positioned, and deal with the catch as it piled up. It was all I could do to keep my hook from permanently becoming part of the reef below, and Peter could handle all four clients with ease. He was like a fishing ninja. Very impressive. We had accumulated a lot of lingcod and rockfish. Peter asked if we wanted to push for our limit, but we felt we’d had enough and elected to head home. Peter stashed the gear, we found our seats, and he turned the boat south for Tofino. 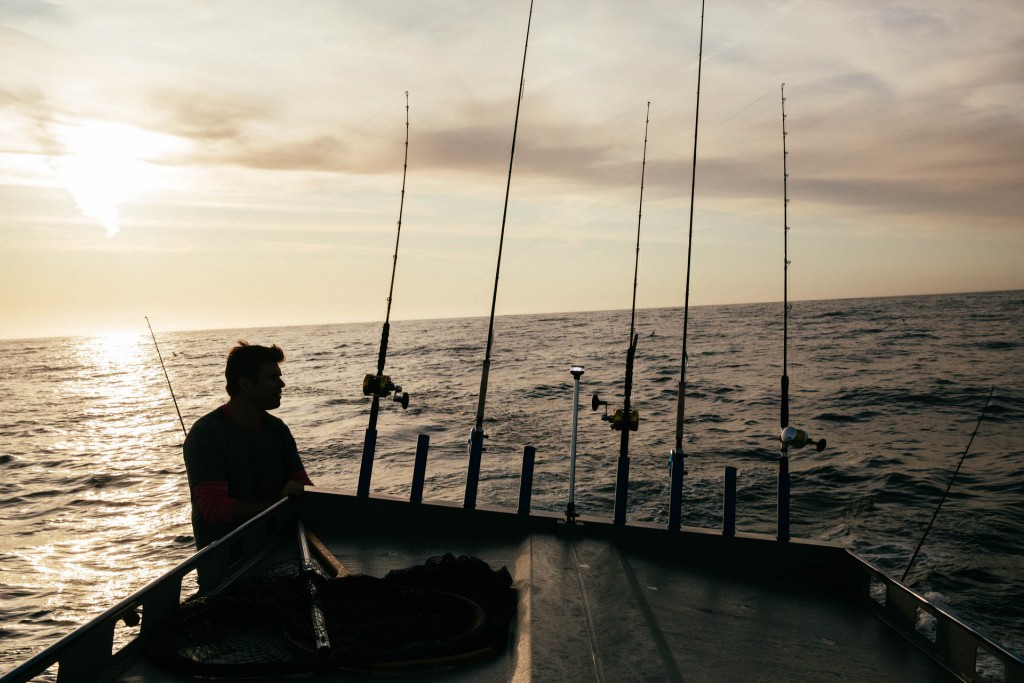 In the end we were a bit disappointed that we couldn’t fish for salmon or halibut, but one of the big points Peter made was how dedicated to sustainable fishing Tofino Resort + Marina was. They maintain a good record of staying on point when it comes to regulations. They also care about the health of the fish in Clayoquot Sound, having just launched a new foundation based off their catch-and-release tournament. It’s all about fixing the damage we’ve done to wild salmon in the past, he said. Noble moves for a new Tofino resort. Besides, we came home with a whack of crab, lingcod and rockfish. We went back to our vacation rental, and I made a killer ceviche with the rockfish, we dipped the crab in from-scratch buttered garlic scallion dip, and then I turned one of those big lingcod into the freshest, bestest damn fish tacos Tofino has seen. Take that, Paul Moran. The crew at 1909 Kitchen (the amazing restaurant at Tofino Resort + Marina) can even cook your dinner for you, if you’re not the cooking type, or even if you’d rather just sit back and soak up their great wine list. We went there the night before fishing….trust me when I say it’s worth a visit. 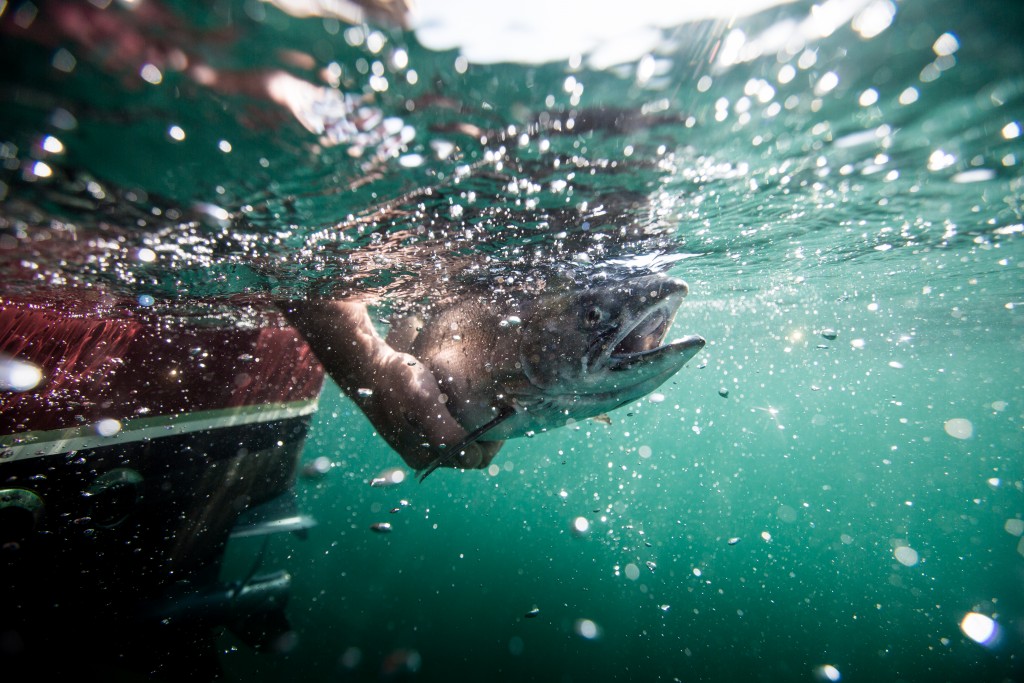 At the Adventure Centre, they helped us ice and package the rest of the fish to take home. We were unaware of some of the details you need to follow, and Peter was so informative, not just in this manner but during the whole day. I know we may not have been seasoned anglers, but Peter noticed and adjusted accordingly. I think he’d fit in just fine guiding a crew of real deal fishermen.

It’s hard to communicate the experience as well as I’d like to, but fishing on the west coast is a special thing, especially when shared with people you’ve known a long time. I had planned this trip for years, and I could not be happier with the end result. What better way to bring people together than in a boat, in search of an unforgettable dinner and memories that won’t fade anytime soon?