Cougar Annie didn’t have a lot of luck with husbands. When she and her first husband Willie Rae-Arthur moved to a boat-access-only five acre plot of land north of Tofino, they had come so he could kick a bad opium addiction. The pristine beauty and rugged lifestyle of the Pacific Ocean certainly has curative effects, and time spent chasing cougars off the land and chopping wood makes for good distraction. They brought three kids with them and carved a tiny Utopia into the rainforest with hard work. An orchard of fruit trees and flowering shrubs was planted. The year was 1915. World War I had just started. Cougar Annie—born as Ada Annie Rae Arthur—successfully raised a total of 11 kids and a million plants here on the rugged, remote west coast. But husbands? Well, they were harder to keep alive.

After Willie tragically drowned in the ocean in 1936, Annie “needed a husband.” Albeit, it could be argued her fierce homesteading legacy would say otherwise. Hoping for a new man and unwilling to leave the property in Hesquiat Harbour (next to what is now Hesquiat Peninsula Provincial Park), she advertised in The Western Producer. The listing read “BC Widow with nursery and orchard wishes partner. Widower preferred. Object matrimony.” She chose a husband from the short list of candidates. He did OK, but eight years later he died at their home when the gun he was cleaning discharged accidentally. Bad luck had struck again. 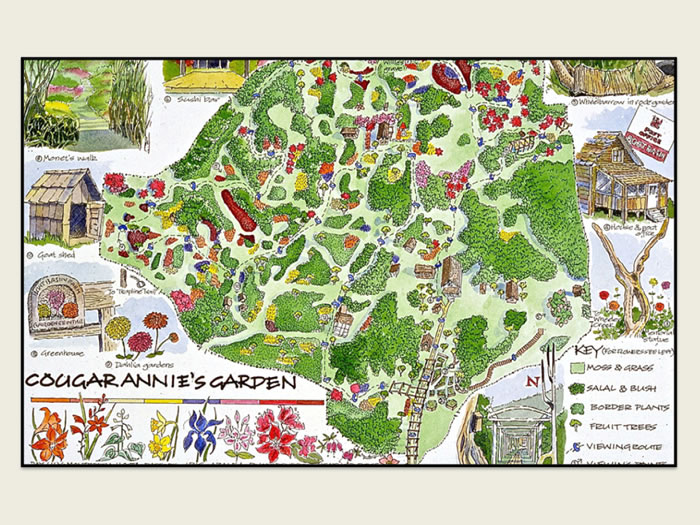 Cougar Annie wasn’t about to give up. She again contacted The Western Producer and told them to run the same ad. Double down. Pneumonia took this husband in 1955. Probably on a first name basis with the editors at The Western Producer by this time, she ran another ad, this time seeking a widower with young children. Hers had become adults and moved away. In fact, some of the Rae Arthurs still live in Tofino.

In 1961, Cougar Annie married for the fourth and final time. He was 12 years younger, allegedly drank like a banshee, stole from the on-site store and was abusive. He attempted to “run Annie off a cliff” to take the farm over. But a character with a name like Cougar Annie does not just get pushed off cliffs. She loaded up the shotgun and chased him off the land.

When you visit—and you can visit—Cougar Annie’s garden, you understand how it provided a healthy source of income over the 65 years she tended to it. Bountiful and beautiful, the garden overflows with rhododendrons, azaleas, fruit trees, roses, dahlias. She sold the bulbs and plants by mail, selling them in Granville Market when it still resembled a farmer’s market. For a time, she also operated a general store and post office on her property. A regular stop in Hesquiat Harbour by the Canadian Pacific Steamships Line Princess Maquinna between 1913 to 1952 brought even more income. Eventually she needed someone to help get the bulbs to Vancouver. Enter Peter Buckland.

Buckland was a friend of Cougar Annie’s, prospector, former Olympic field hockey player, and a stockbroker from Vancouver. An adventurous soul, Buckland met Annie when he hiked onto her property way back in 1968 “looking for eggs” during a prospector mission. When she passed away in 1985, he bought the acreage and moved there part time to restore the gardens to their former glory. He even expanded on the property with beautiful and creative timber-framed outbuildings and walkways throughout the rainforest. The original buildings, including Annie’s residence, remain (mostly) standing.

Buckland established a non-profit organization named the Boat Basin Foundation to manage the property. The Temperate Rainforest Field Study Centre—a stunning main building plus seven cabins—was built on a high point. Together with Ecotrust Canada and the Hesquiaht First Nation, the Boat Basin Foundation rents out Cougar Annie’s Garden for special events. Once a year, Buckland invites his friends to Boat Basin where they play a field hockey tournament at low tide. They eat a massive feast at a long outdoor woodslab table. Then they blow something up with dynamite. Cougar Annie would be proud. 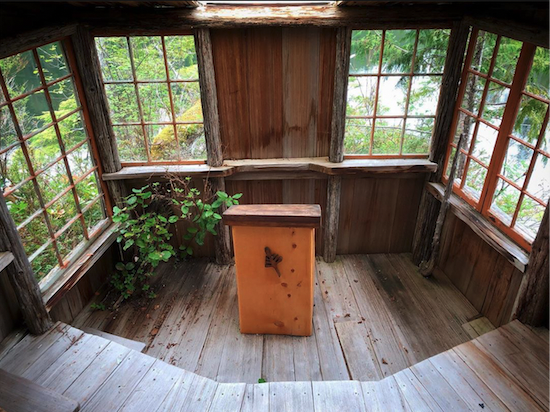 Cougar Annie claimed to kill many cougars over her lifetime to safeguard her precious goat and chicken. In 1955 alone, she received bounties for 10, but claimed to have taken “62 cougars and about 80 bears.” While this heavy loss of wildlife seems tragic in modern day, living off the land in the wilds back then was the real deal. Times change, eh.

Special thanks to Adam Buskard of Tofitian Cafe and Tofino Time for assistance, and a boat ride to Boat Basin