For those in the know, the west coast means more than merely Tofino. Our neighbours in the rugged hamlet of Ucluelet have long been friends and adventurers who share in the good times Vancouver Island offers. Ucluelet is a fun little town of roughly 1700 that lies a half hour south on its own small peninsula.

As Tofino grew from the fishing and logging town it once was into the surfing, culinary and adventure capital it has become, Ucluelet became a bit of a haven for those who wanted to maintain the leisurely pace of life that island living offers. It’s a stunning place surrounded by rocky beaches, mountains and safe harbour for a big fishing fleet and friendly sea lions. One of our favourite Ucluetian offerings is the Wild Pacific Trail. 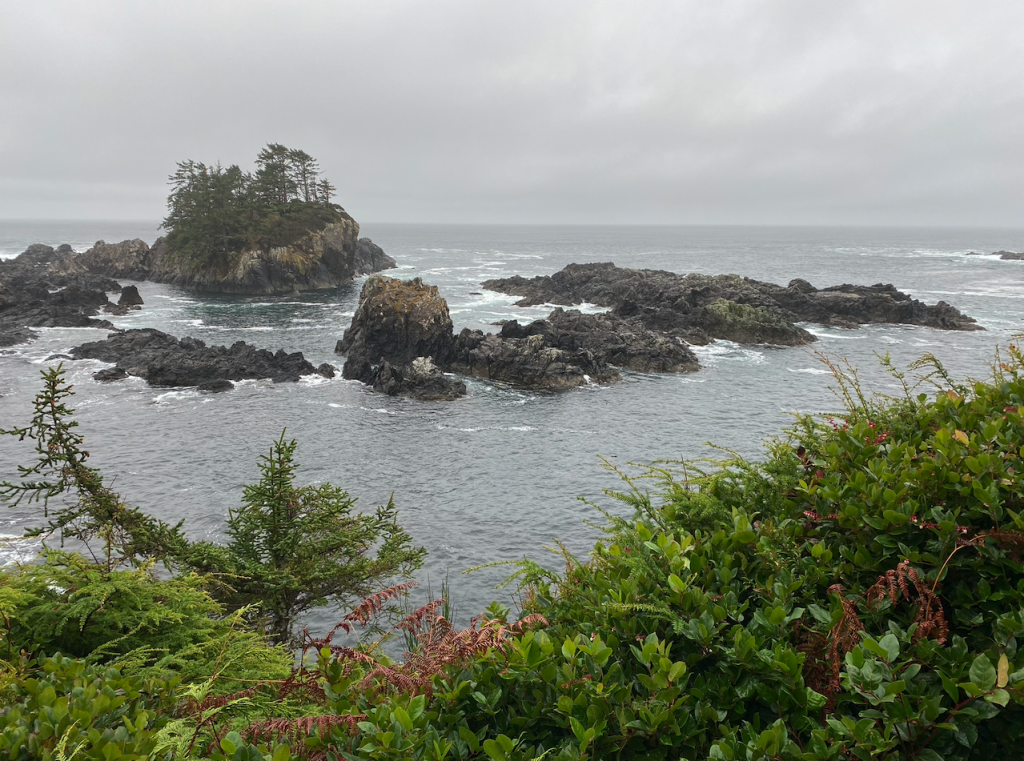 “Oyster Jim” Martin is the man responsible for this multi-segment trail that follows the rugged coastline. “I start from impossible and work backwards from there,” the infamous community maverick is quoted as saying. And he’s done it, creating an attraction coveted by both locals and tourists. The fisherman and hiker began work on the trail in 1980, and finally got permission from the town in 1996. Since then, working alongside the Wild Pacific Trail Society and the town of Ucluelet, Martin continues building towards his ultimate goal of linking the trail network all the way to Long Beach in Pacific Rim National Park. For his hard work and vision, Martin has been recognized with the 2016 BC Community Achievement Award and Canada’s Meritorious Service Medal in 2017. 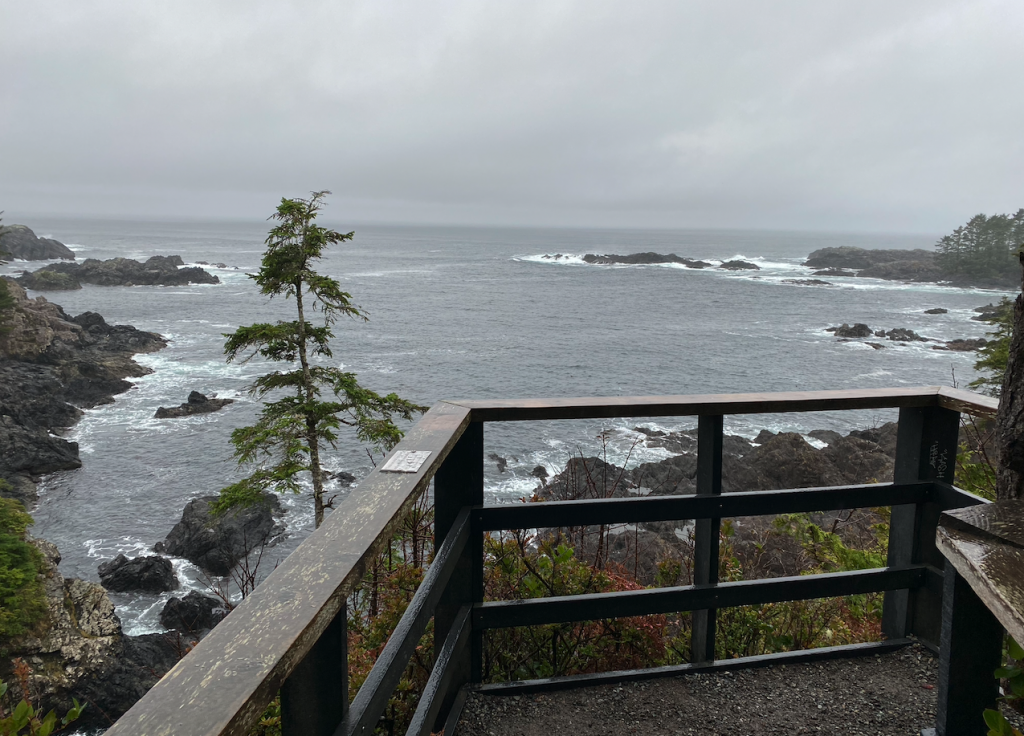 Ucluelet’s mostly rocky outcroppings stand in stark contrast to Tofino’s mostly sandy beaches, but don’t forget that the wildly beautiful white sands of the south end of Wickaninnish Beach are officially Ucluelet. So is Florencia Bay and Wya Point. Plus the town has a couple sneaky beaches well worth a visit. Ucluelet has much to offer when it comes to shoreline. 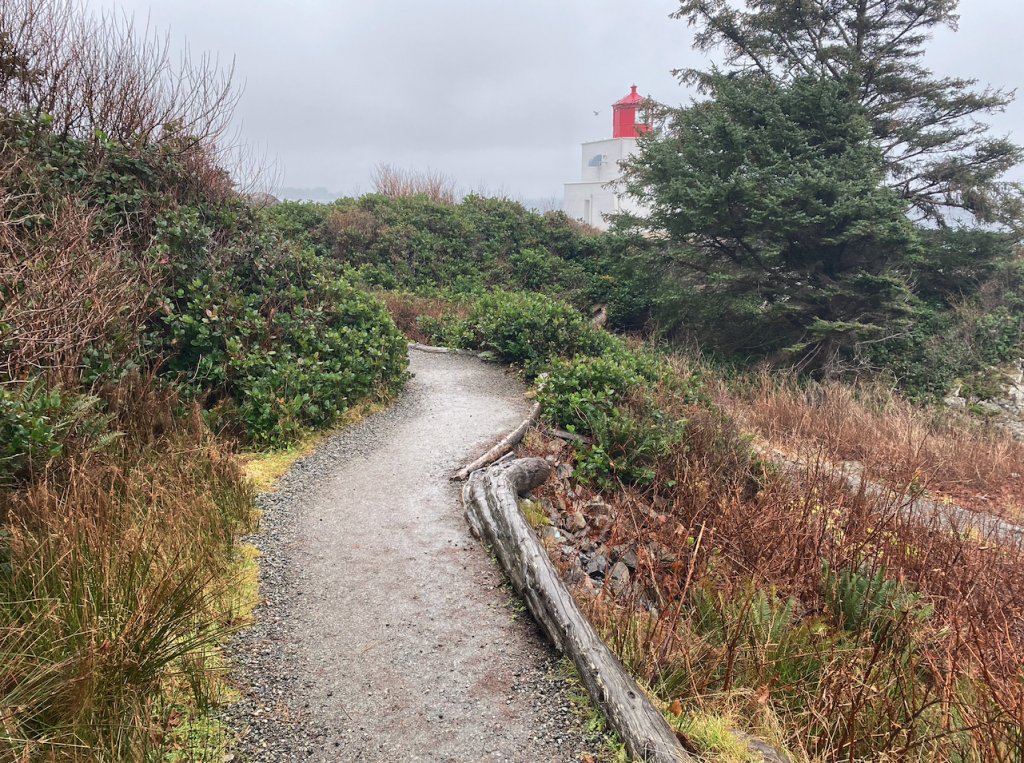 Most who make the drive out to Amphitrite Point come to see the only active lighthouse in the area, but make sure you put in a bit of effort to walk the Lighthouse Loop afterwards. It’s a short walk on the Ucluelet Peninsula and offers up-close views of gnarly coastline, often being smashed with intimidating waves in winter. This spot gets 3.3 metres of annual rainfall, so bring your jacket, eh. The nearest active lighthouse to the north is the Lennard Island Lighthouse off Chesterman Beach. To the south, it’s Cape Beale in the south of Barkey Sound. 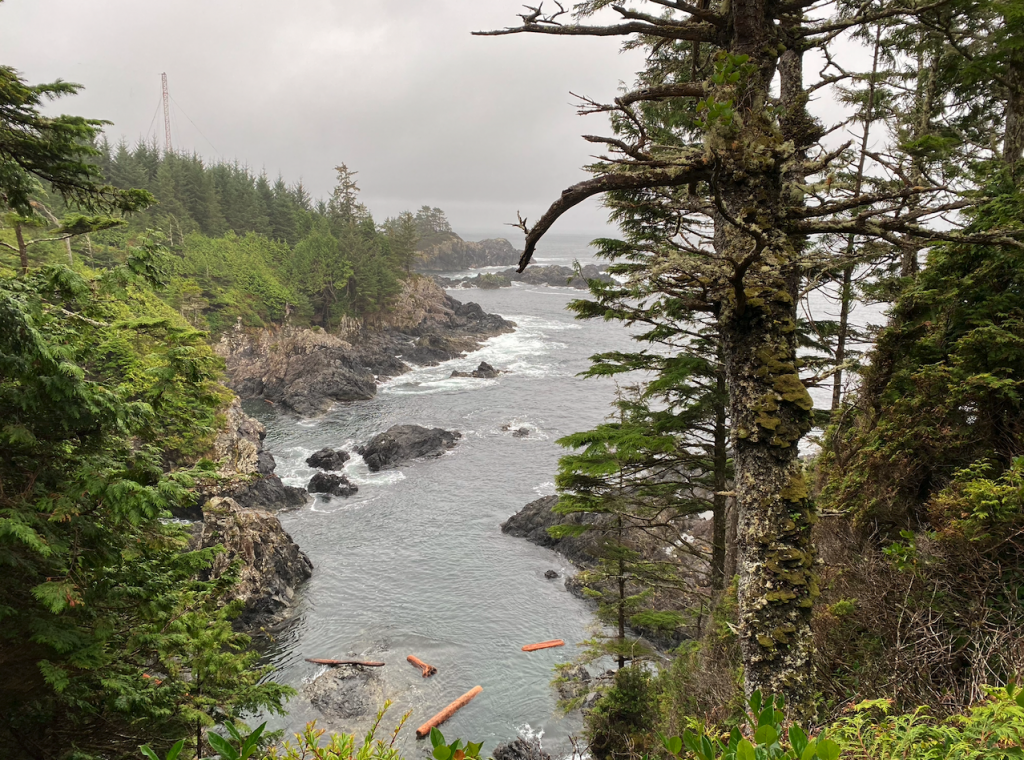 The Graveyard of the Pacific runs from Oregon to the northern tip of Vancouver Island. 484 shipwrecks have occurred at the south and west sides of Vancouver Island, and one of them happened just offshore from here. After the Pass of the Melfort sunk here after striking a reef in 1905, this particular cove filled with flotsam and jetsam from the wreck. All aboard perished. In 1906, the lighthouse was built as a response to the tragedy. A century later, divers from Ucluelet eventually recovered the bell from the ship. 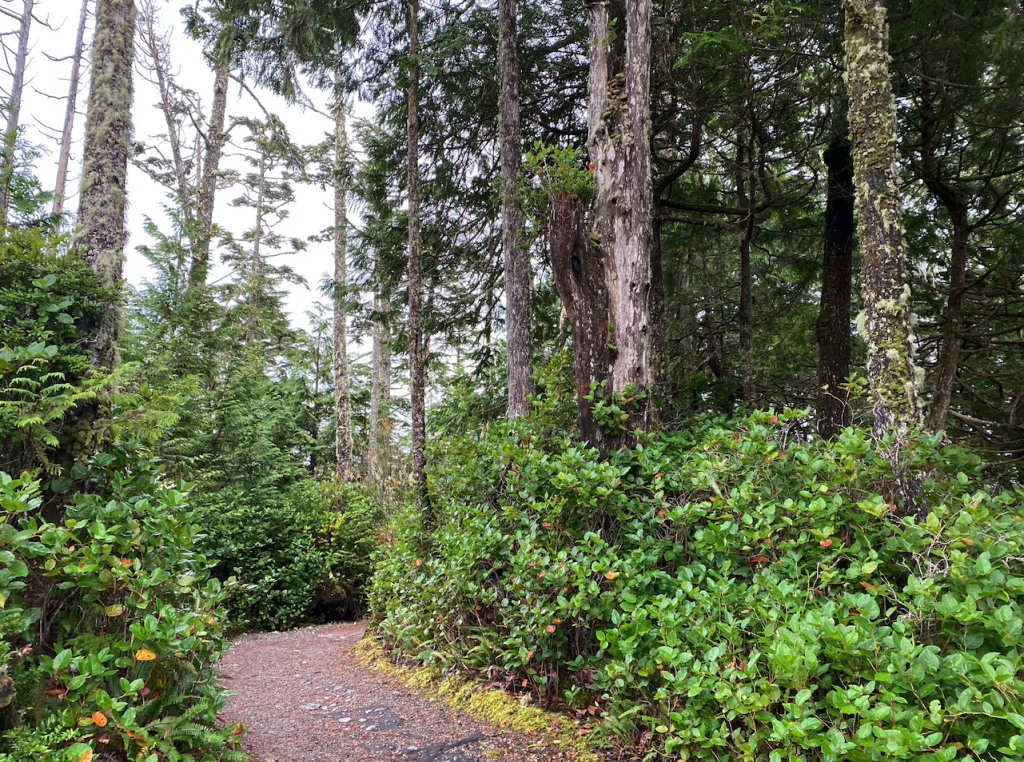 Thick salal and coastal forest hem in the trail between lookouts, and the famous moisture of the west coast permeates everything. Left to its devices, this trail would grow over rapidly, but Oyster Jim and his team continue to keep the trail maintained. On the west coast, heroes don’t wear capes. They wear rain slickers. 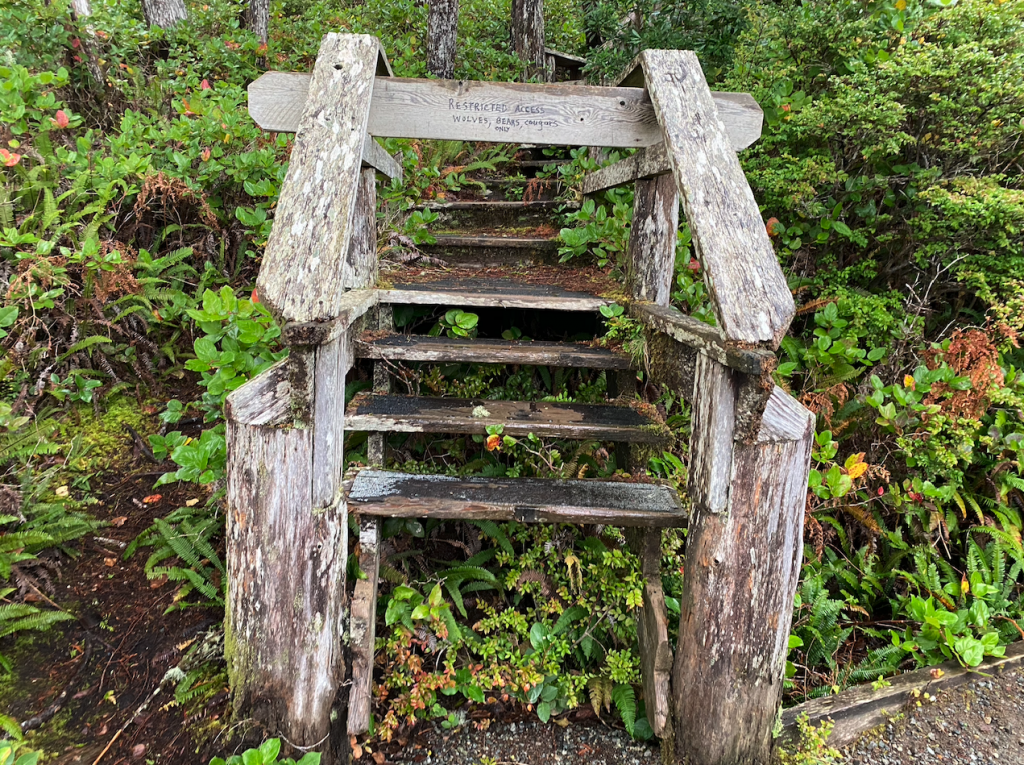 Read the sign closely, human. You’re not the only one walking these trails. 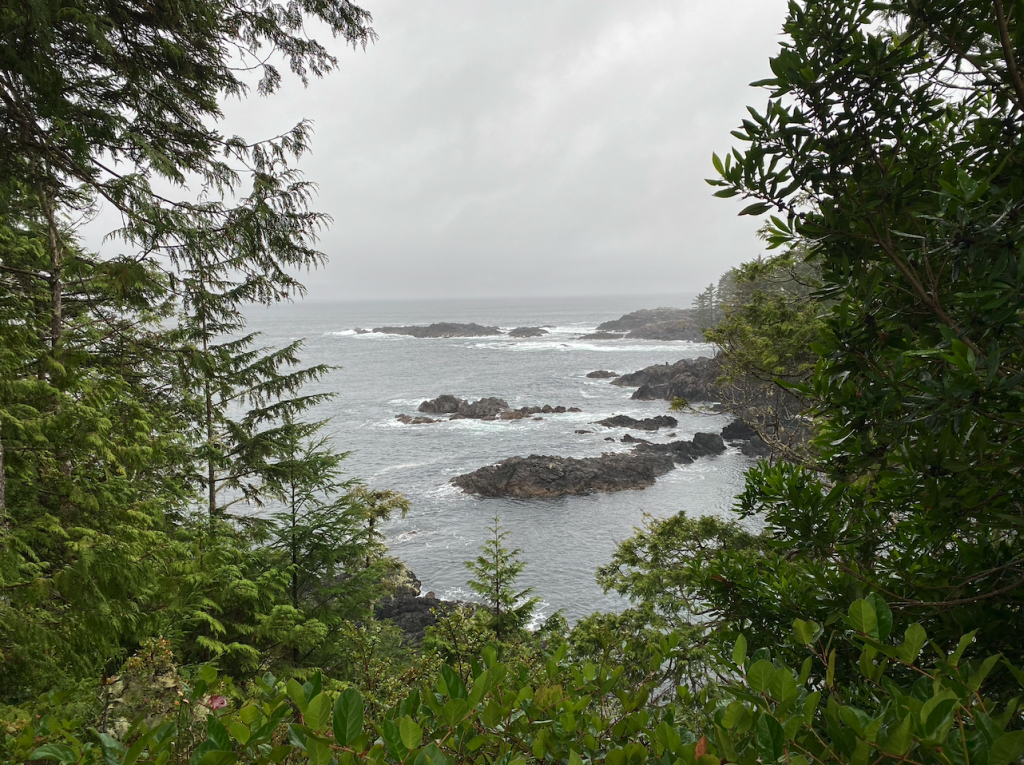 There are two main areas and several stretches of the eight-kilometre Wild Pacific Trail. The Lighthouse Loop (pictured) is a 2.6-kilometre loop. Terrace Beach Interpretive Trail is a half-kilometre jaunt. Big Beach to Rocky Bluffs is a five-kilometre slog (one way). One of the highlights is the Ancient Cedars Trail…everyone loves big trees. 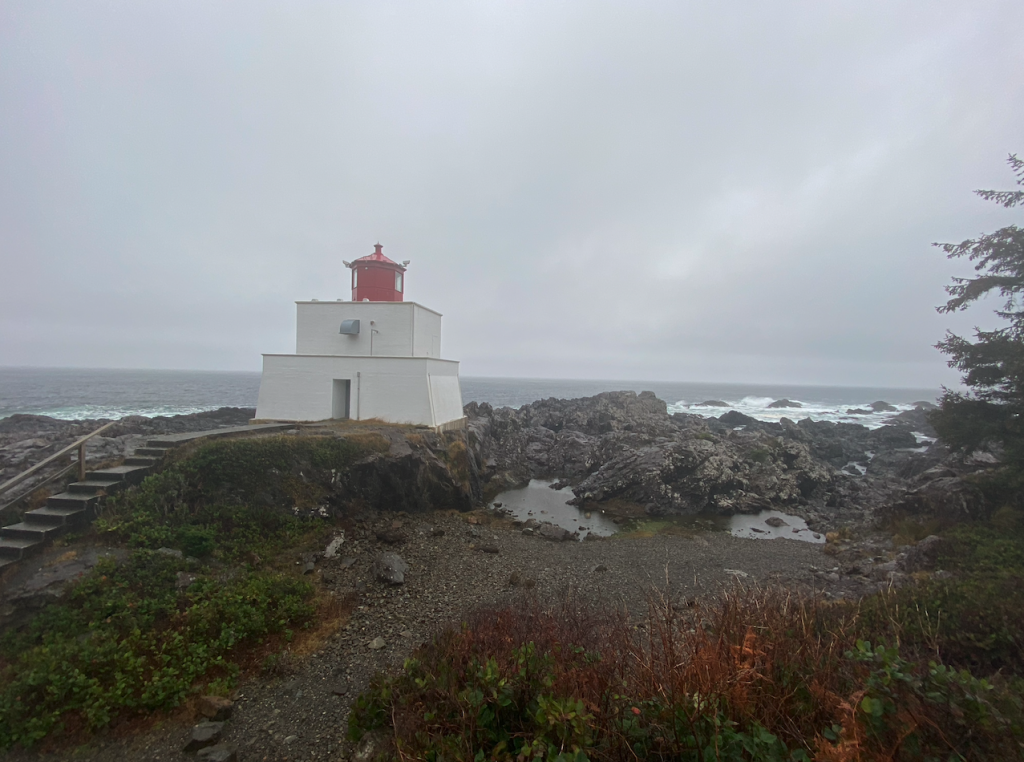 Formed in 1999, the Wild Pacific Trail Society is a registered non-profit organization. The Wild Pacific Trail Society board is comprised of a committed and passionate group of a dozen Ucluelet citizens with a wide and diverse range of skills, knowledge and experience. Each director is deeply committed to the vision and mission of the society. Board members work on individual areas of interest: trail planning, educational programs, promotion, administration, signage, and communication with the assistance of a part-time administrator and a trail naturalist. While the Wild Pacific Trail Society’s main focus has been trail development, trail-based educational programs have emerging as a high priority to connect people to nature. Free guided programs and site-specific interpretive signage grows every year.