The Sirens of the Pacific Rim

A tragic but true tale of the doomed Steller Sea Cow

The quick-changing weather and stark beauty of Clayoquot Sound can overload the senses. Tricks of the light during sunset surfs, in the fogust mist, or under shadows through kelp provide stories to be embellished in front of the fire. These stories put a mystical lens on the coast, and all good myths contain a little truth. For instance, there used to be mermaids in these waters. They were just a bit different than what one might expect.

The Steller Sea Cow was a massive relative of the manatee, averaging 10 metres (33 feet) in length and weighing in at 11 tons. Their 10-centimetre-thick blubber was so buoyant that these school-bus sized sirenians could not submerge themselves. They propelled along the surface of the sea with a powerful split tail and forelimbs. Rather than teeth, their mouths were filled with bristly pads, to better chew the thick kelp that made up their diet. Kelp forests once formed a near contiguous belt from Japan to the Arctic, and all the way down to Patagonia. Only a forest of this magnitude could host such large animals. Highly intelligent, these sea cows lived in groups alongside monogamous mates. They fiercely defended their young. With armoured skin and intimidating size, they were difficult targets for the few predators they had, such as orcas and indigenous hunters. Indeed, the mighty sea cow was difficult to kill, but far from immortal. Within twenty-seven years of European contact, the Steller Sea Cow would be extinct.

The most in-depth account of the Steller Sea Cow was by a naturalist named Georg Wilhelm Steller. In 1740, Steller boarded a Russian research vessel en route to “explore” a land that was already well-civilized; the west coast of North America. Many are familiar with some of ol’ Georg’s other discoveries: the Steller’s Jay, Steller’s Sea Lion, or even the Steller’s Eiger. Very few are familiar with the Steller’s Sea Ape, a cross between an ape and a sea otter which the crew encountered only once, but that is another story for a future dark, winter’s night. There are over a dozen species named after Steller. He can probably be forgiven for this self-centered practice—which was in vogue at the time—due to the in-depth studies Steller wrote while stranded on Bering Island.

The book, De Bestiss Marinis, contains incredible stories. Half the crew, including the captain, died of scurvy over winter. The Steller Sea Cow made up most of their diet, as the lumbering creatures made easy targets for the crew’s harpoons. The blubber, according to Steller, tasted like almonds. The meat was like corned beef. The milk from females could be drunk like milk or churned into butter. The hide was made into belts and boots. Steller wrote about their intelligence and empathy, claiming that some sea cows would rock the boat in an attempt to free their captive relatives. One male sea cow came back day after day to mourn his mate where she had been pulled ashore. This was to no avail. Bering Island became a stopping ground for whaling crews to re-fill their stores with the long-lasting meat until the last sea cow was spotted twenty-seven years later. 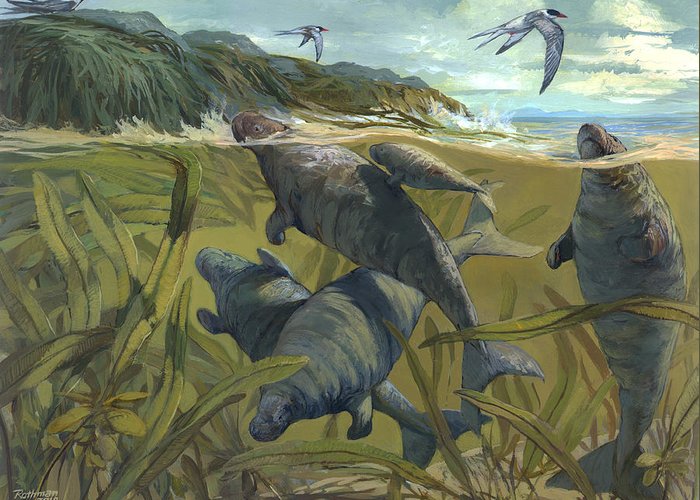 So, where did they go? It appears that the range of the Steller Sea Cow was already reduced to the North Pacific by the time they were encountered by Europeans. Biologists have modeled the sea cow population during the years they were hunted by European whaling crews and it is unlikely to account for the total loss of the species. Rather, the extensive hunt and trade of the Sea Otter pelts may be to blame. The eradication of sea otters left no predators for sea urchins. Kelp forests made up the forage and cover for sea cows. And what do Sea Urchins eat? Kelp. Kelp forests, to this day, have yet to return to their historic sizes due to overpopulation of sea urchins. Shrinking kelp forests, along with hunting, provided the death knell for these Pleistocene giants.

They did not disappear completely in vain. The scientific convention of the day was that the ocean was limitless in supply. The documented extinction of sea cows provided biologists with compelling evidence that there were limits to what any species could take. Stories like this, along with the growing body of evidence towards the interconnected nature of species, formed the inspiration for the modern conservation ethic. We may not be able to swim with these lovely, chubby mermaids in the kelp beds of Clayoquot Sound, but we can learn from the lessons of their loss. Eat a sea urchin today.

Get out on the water with us. Although we cant guarantee a Steller Sea Cow sighting, we do guarentee wildlife sightings in the Clayoquot Sound. Check out the Marine Adventure Centre for more information.