We love music. We love cocktails. We love adventure. In the tradition of pairing up sweet tunes with sweet, boozy tastes, we introduce the third instalment of our music series, where we take musical tracks by some of our favourite artists and pair them with adventurous drinks…this time the brand-new cocktail menu at 1909 Kitchen + Bar. From Hendrix to Grimes to Waits, we vibe with some of the best while we imbibe some of the tastiest. Drink up. 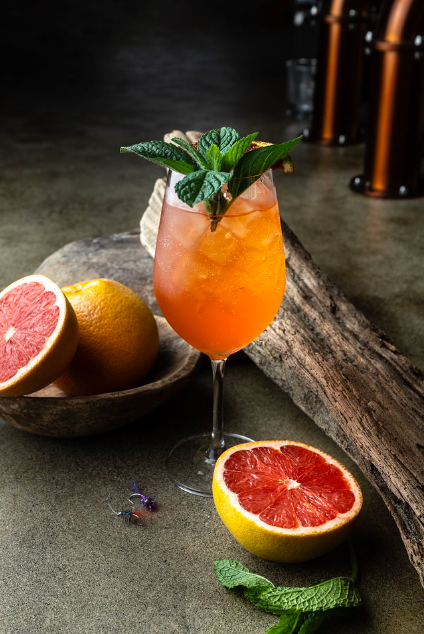 For every bourbon bomb or tequila hammer, there’s a drink out there for those who prefer subtlety and freshness. For those who keep it light, the Freshwater Fly celebrates the sunny side of the 1909 Kitchen + Bar waterfront patio with a bright effervescent flavour profile. Sparkling rose from our friends at Unsworth in the Cowichan Valley complements the slight bitterness of Aperol and fresh grapefruit.   Unlike Campari, Aperol is softer, slightly sweeter, and has less alcohol. So what to pair with this lovely version of an Aperol spritzer? How about a cover of TV on the Radio’s Wolf Like Me, gently attacked from each side by both Lera Lynn and Shovels and Rope? It has just enough oomph to get you across the finish line, but with no extra effort. Fully endorsed for long afternoon and evening patio sessions, the drink is like the song: a fresh take on a modern favourite that still retains its bite.

Shines when the sunshine shifts.

There’s a curse comes with a kiss.

The bite that binds, the gift that gives. 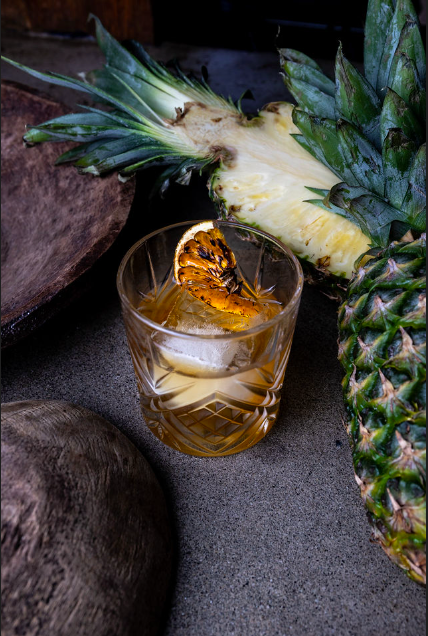 Let’s get one thing out of the way: a traditional Old Fashioned uses whiskey—not rum—so we know immediately that the 1909 Kitchen + Bar Pineapple Express version is a drink that happily breaks the rules in search of a tasty, fresh offering. Anyone can order an old fashioned. We do it differently around here. As such, we paired it with a track by the new king of hip hop and Grand Refuser of the Rules, Kendrick Lamar. We go even further and pick an eclectic, upbeat song off the rarely visited, purposefully work-in-progress, 2016’s untitled unmastered. The entire album documents the making of Lamar’s ground-breaking, Grammy-nominated masterpiece, To Pimp a Butterfly, but the last track, untitled 08 | 09.06.2014, is equally sweet and strong and experimental, not unlike a rum-forward Old Fashioned. Soak it up then try the whole menu, whether it’s 1909’s or Kendrick’s. They both go down smooth all the way through.

If you can’t get it right, tell me, do you got the stamina?

A rapper chasing stardom, how can I fast forward?

My accolades better than all them 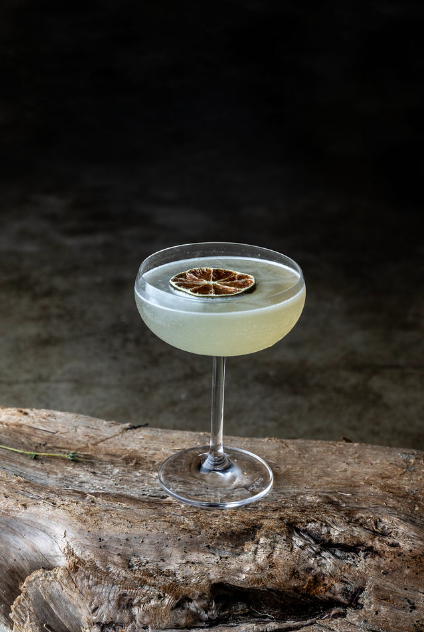 Mezcal is tequila’s rough-around-the-edges cousin from across the tracks. Made in a copper still rather than the clay pot most mezcal is created in, Los Seite Misterious Mezcal is what happens when that cousin grows up and becomes more successful than you: smooth, smoky and oozing unique flavour. With that in mind, it only makes sense to add some Tom Waits to the list. With a discography as deep as the underwater canyons off Vancouver Island’s western shore, Waits has more than enough songs to lend to the cause, but one that pairs best with a smoky coconut mezcal cocktail has to be Christmas Card from A Hooker in Minneapolis. Just like a boozy-but-tasty cocktail, the truth in this song sneaks up on you slowly. Like the bartenders at 1909 Kitchen + Bar, Waits is a magician at riding the line between styles and flavour profiles. Sip slowly and revel in the colourful details in both sound and taste. You’re welcome.

Hey Charlie, I think I’m happy for the first time since my accident.

I wish I have all the money we used to spend on dope.

I’d just drive a different car every day, depending on how I feel. 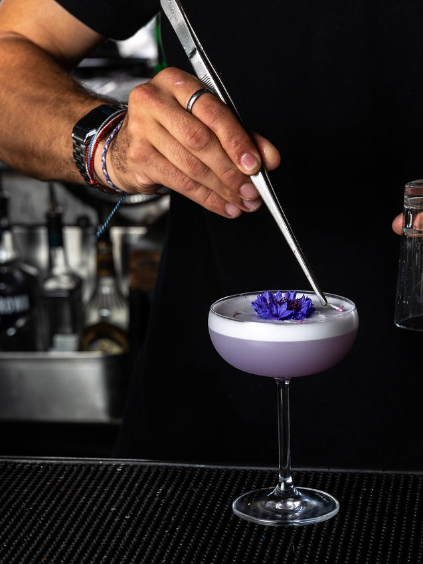 The working title for this cocktail was originally “1909 Purple Haze Sour” but in a nod to the Empress 1908 Gin used as the base we changed it to Victorian Sour. Plus, we get our fair share of visitors from our provincial capital, Victoria. Either way, for this cocktail, we pull musical inspiration from the OG name and choose Jimi Hendrix Experience’s If 6 was 9, off one of the best rock albums of all time, Axis Bold as Love. Why? Because it rocks. But there’s another more subversive reason we chose it: it’s on the Point Break soundtrack. If you have to ask which Point Break we are referring to, you can kindly find the exit yourself. Just like Jimi and crew, this cocktail proudly lets it’s “freak flag fly” with a proper sour element in the one ounce of pure fresh lemon juice.  Have a few more than one and you’ll devolve into feedback and static like the lengthy outro of the song.

Alright, if all the hippies cut off all their hair,

Dig, ‘cos I got my own world to live through,

And I ain’t gonna copy you.

For those who love gin, nothing else will do. And messing with gin will draw the ire of those same people. As such, its best left lightly touched and that’s what our brilliant bartenders at 1909 Kitchen + Bar did. A little aperitif for some soft, fresh, fruity flavour. Fresh lime; gin’s favourite bedfellow. And a housemade simple syrup made with fresh thyme. You may have noticed how many times the words “fresh” showed up in the past few sentences? That’s why this cocktail gets paired up with Dionne, by The Japanese House featuring Bon Iver. The Japanese House is Amber Mary Bain, a pop musician from the land of gin, the United Kingdom. Everything she touches comes across fresh and layered with context, both in sounds and lyrics. Whether she’s channeling Stevie Nicks in a Fleetwood Mac cover or feverishly knocking out single after single without mainstream fanfare, her music retains a raw, natural vibe. Dionne is a standout, not only because Justin Vernon of Bon Iver fame layers in his standout vocals alongside Bain’s haunting voice but also because of the honesty in the lyrics and the depth of the keys. She makes simple pop music pop, just like this cocktail makes the botanical notes of the gin pique perfectly. Drink it in all at once and notice how it works together…as music and food should.

I’ve been thinking about my storyline,

And how your past becomes your present if it’s always on your mind.

We played Dionne Warwick, Walk on By.

And Freddy put his head between his legs and cried.

Pisco, sake, and rose? Pick a lane, buddy. It may seem like a bizarre concoction but—like an artist schooled in every style—when brought together the result is both unique and eclectic. So who can measure up to this cacophony of flavour? How about Grimes? Forget her association with Elon Musk. This East Coast Canadian visual artist went viral while studying in Montreal, and has been putting out music ever since her 2012 album, Visions. Part pop, part ethereal aural orgasm, part undefined, she is a verified genius. On 2020’s Miss Anthropocene, the standout track IDORU powers forward like spring runoff with a thumping bass line and sing along vocals. Allegedly based on a relationship with fellow Canadian singer songwriter Nicole Dollanganger, the lyrics are less interesting than the music, but the music more than makes up for it.

Unrequited love has reassembled me.

And if you said I do, I’ll reassemble you, baby.

And you’re so cool, ’cause you don’t think you’re cool

You cannot be sad.

Because you made my all-time favorite music. 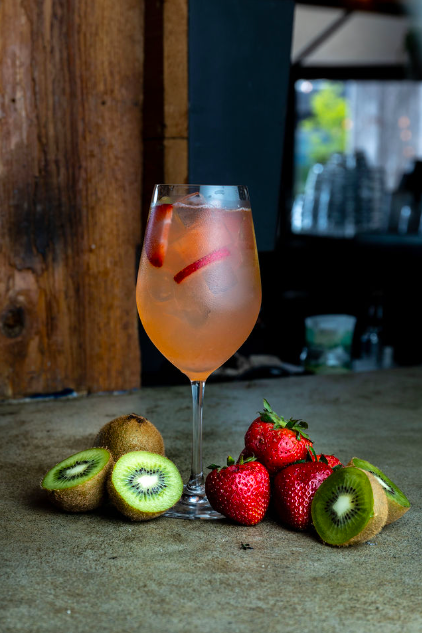 Today, The Black Keys are two men who make entire stadiums light up with their unique brand of dirty, grungy blues, but at the turn of the century they were simply poor touring musicians with day jobs, trying to eke out a living. The music remained the same: loud, rock n’ roll that wrecked rooms from Akron to Portland to Vancouver. That’s why we paired I’ll Be Your Man off 2002’s The Big Come-Up with the One-Two Punch Spritzer. It’s a double punch of talent that is refreshingly strong. For fans of the Keys who don’t know this album—or the entire back catalogue which is strong as a King tide—be sure to dive deep. It’s full of hidden gems.

I’ll be your man.