Welcome to the second in a series covering first time experiences in our town. Dion Olin is the mother of Tofino Resort + Marina ambassadors Mathea and Sanoa Olin. She also is a heckuva conversationalist.

What year is it that you first came Tofino?

I moved to Tofino in 1998, but I started visiting here in 1996. I was living in Canmore, Alberta at the time but had recently returned from living in Australia where I had spent a lot of time near and in the ocean and had my first attempts of surfing. I kept hearing about this place called Tofino in Canada where you could surf so I started making the trek for weekend surf trips.

I remember the first time driving down the hill at Long Beach and seeing the beaches, I pulled into the parking lot and ran down to the water, I was so blown away! After being raised on the prairies and having spent many years in the Rockies I just had no idea Canada had such beautiful big sandy beaches. I was honestly awestruck. 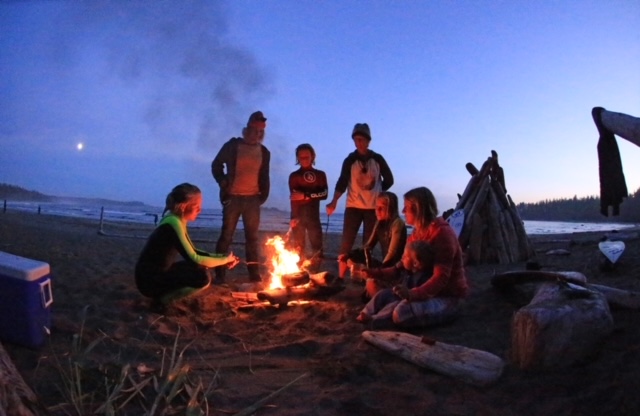 Did you surf on that trip?

Yes, I absolutely did. We rented soft tops, went back to Long Beach, and got to witness a perfectly big summer south swell. I had a vision of what I thought I was going to do and then got extremely humbled by the cold water and pounding whitewash and don’t think I even made it out. The day after, I met a hot surfer guy and we went and floated around at South Chesterman’s where I actually don’t even think there were waves but it didn’t matter. I was way too preoccupied.

Was it surfing that pulled you back after that initial trip?

Actually, I ended falling in lust with that hot surfer with the most beautiful eyes and, yes, I also wanted to keep surfing. One of my weekends out here, I ended up out at Quait Bay and got offered a job to open a spa at the original floating Clayoquot Wilderness resort, so I decided to follow my heart. I ended up moving about a month later and found myself living at the old logging camp out on Catface.

Where did you stay?

The first time we came I think we had plans to stay in our truck or sleep on the beach, but we ended up splurging in a room at the Dolphin Motel. The next few trips after that were mainly at the Pacific Rim Campground (now known as Surf Grove). Occasionally we rocked up to an AirBnb on the beach and settled in. I remember spending mornings hanging out at the Coffee Pod patio, it was such a great scene and so fun to people watch. In the evening there were only a couple places to go so after a sunset surf. We’d either end up at the Weigh West Pub (now The Hatch Waterfront Pub) or The Schooner for oysters nami nori and halibut Bawden Bay. 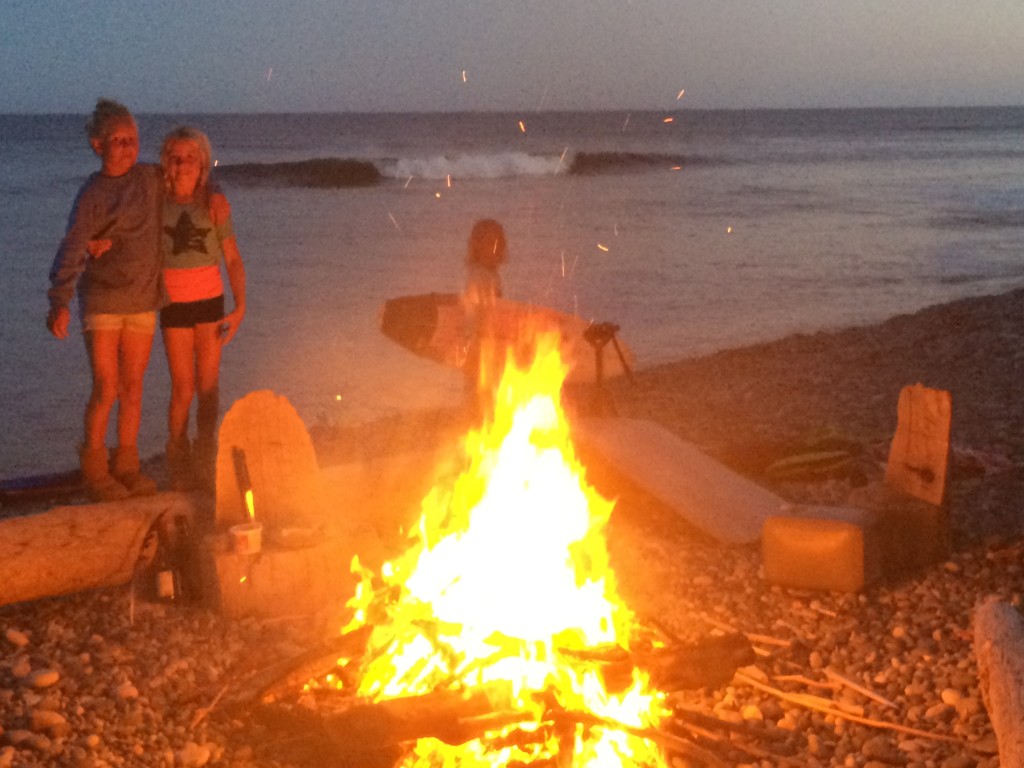 Was the community welcoming? Was it easy to find a house to live in when you finally moved to town?

I was quite lucky. I was teaching yoga in Canmore at the time and there wasn’t really a yoga community here. I had such a passion to teach and share and all of Tofino seemed keen. I started teaching on the beach and when the weather turned as it always does I began teaching at Solwood. I taught about five classes a week and we’d pack the beach house. It was so much fun to connect into the community that way!

Was it easy to find a house to live in?

We were so fortunate back then. People would come to Tofino for the summer and rent their beautiful rustic beach homes to the locals for the rest of the year. I got to be part of a generation that had a few great years of living on the beach and all the memories that come along with that. Summertime, there was always a bit of a scramble. We were in our mid-20s so it wasn’t a big deal and it always worked out. 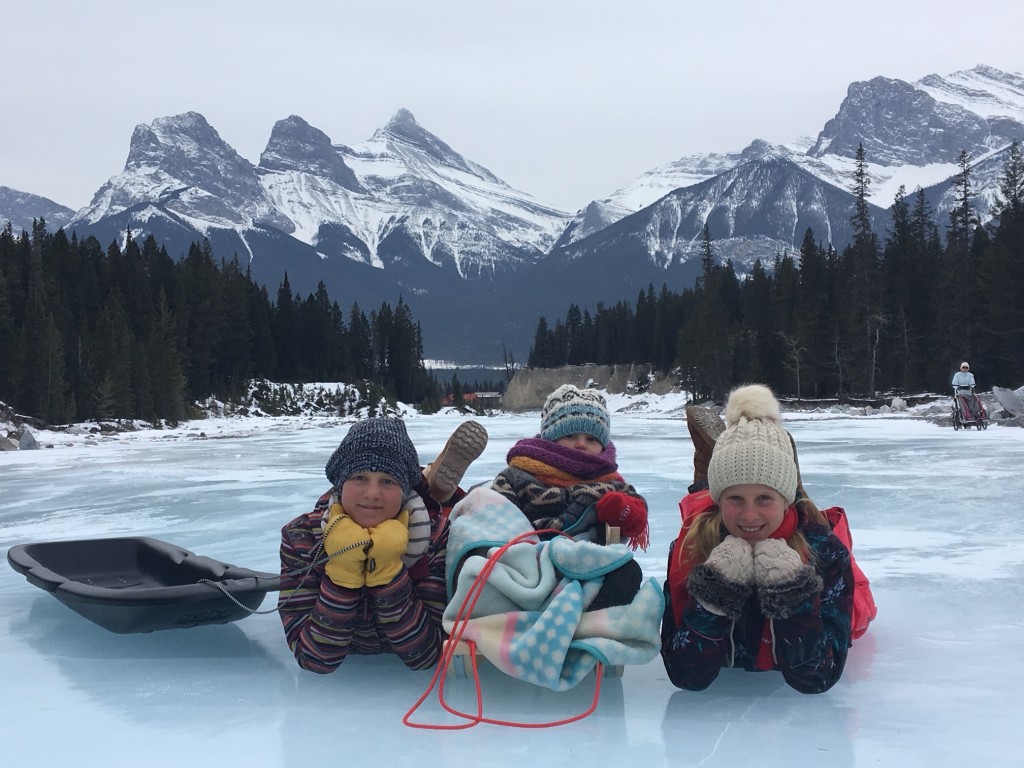 What was it like having a young family in Tofino back then?

In my late 20’s, I was working up at CMH heliskiing in the winters. I ended up getting pregnant with Mathea and, even though I still had a place in Canmore, I really wanted to have a home near the ocean. I heard of a place on Cox Bay that was a great price and bought it sight unseen.

For the first handful of years we’d go back and forth from here to Canmore with the girls. It was really a priority for me to give them the best of both worlds: ocean and mountains. I have always found Tofino and its climate a little challenging for young children in the winter and the mountains were such a great playground. They were both skiing by the time they were two.

When school age approached, we ended up in Duncan, B.C. at the Waldorf school for a few years. And then I realized my dream was more about freedom, unschooling and having my children at home with me, so I made the choice to settle in here full time and quit moving back and forth.

Watching your children grow up in Tofino and become surfing champions must be a rewarding experience.

Absolutely. It’s so amazing to see them so connected to themselves and their environment and thriving within that. I always gave them a lot of space to be free and develop physically. From a very young age they blew people away with how talented they were at everything. No matter what they chose to excel and focus on they were going to succeed. I LOVE watching them surf and surfing with them, and I’ve even found a love for being a full-on surf mom. 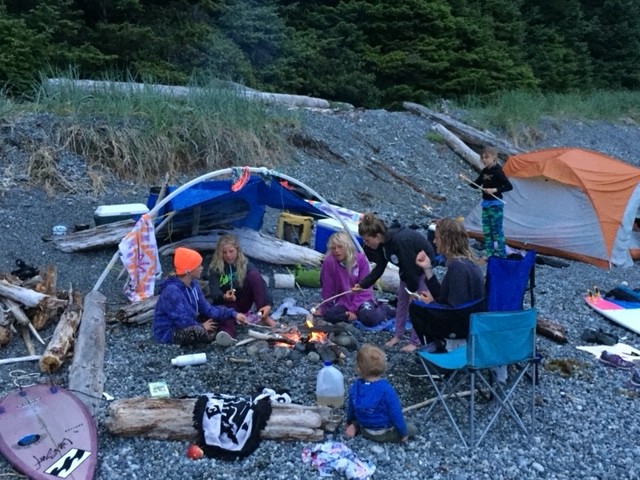 People assume calling a place like Tofino or a mountain town “home” is almost impossible, yet here you are. As are many others. The dream can be realized.

I made choices at a young age, when I was 21 or 20, so I would never be scrambling to get in. I was always kind of a step ahead that way. There’s so much to be said about timing, but I agree with you. I think if you commit to a place, you can go wherever you want and raise your family. There’s also this opportunity to stay young at heart with your children and live life with your children and through the eyes of a child.

What advice would you give someone for their virgin visit to Tofino?

You know, I’ve realized over the years that, while the ocean and surfing was why I came here, there’s so much more. Tofino is one of those places that keeps calling you deeper and deeper into yourself and into nature. I would suggest spending time on the beaches. Don’t be in a rush or have too much of an agenda. Enjoy a West Coast sunset with a glass of good wine, take in the magnificence of the big old trees and definitely get offshore [on a boat]. I feel like every day I spend off grid (which isn’t so easy anymore) and out on a boat or remote island I’m forever changed. Honestly, though, just come here and be open to the experience. Let the weather and what’s happening around you dictate how you maneuver. 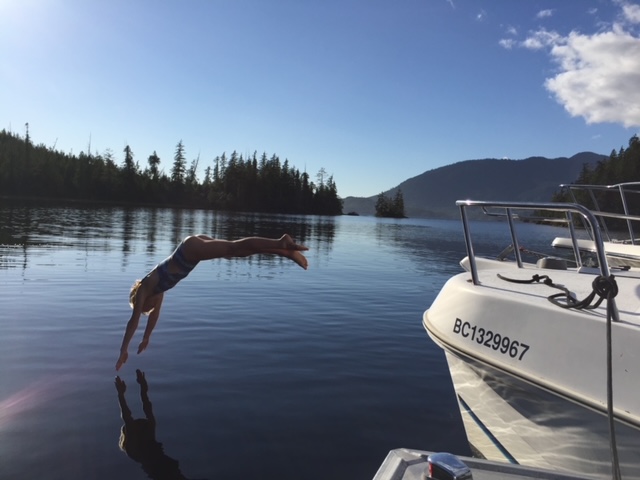 I think people can forget how healing nature is, and how even only one day spent on a beach or in the mountains can help reset their mood or emotion.

The greatest healer is nature. With so much going on in the world this summer, when I was on the beach, as busy as it was, everybody was happy. When the sunset would happen it was so powerful to see so many people just stop and appreciate the beauty unfolding before them. If someone can come here for a day and jump in the water and go on a hike and just forget about some of the stresses….I just so encourage Tofino to be that place of refuge.

I know what the negative ions of the waves crashing on the shore and walking barefoot on the beach and sitting by a fire has done for me this year, and I believe everyone deserves that same opportunity. You know…come get nurtured by nature, or inspired by it.