In early October, a crew set out from Tofino Resort + Marina crazy early in search of tuna. This is not a rare sight during Tofino’s tuna season. If there’s one place that can claim the title of “West Coast Tuna Fishing HQ” it’s our fish-friendly docks in Tofino. Many feverish fishermen and women use these docks to access the great, glorious blue water of the Pacific Ocean.

This time, though, the aim was a little different. Packed with spearfishing guns, 5-millimetre freedive wetsuits, and the talented lens of Jeremy Koreski, this boat was bound for glory, hoping to capture the process of shooting the first offshore tuna in Canada with a speargun. West Coast Waterman of Cumberland, B.C., Galyn Franklin brought his freedive and spearfishing expertise, Willie Mitchell brought his powerful boat and pro skills he’s learned while hunting offshore tuna, and Koreski captured the first unsuccessful attempts at putting tuna on a spear on Canada’s west coast. 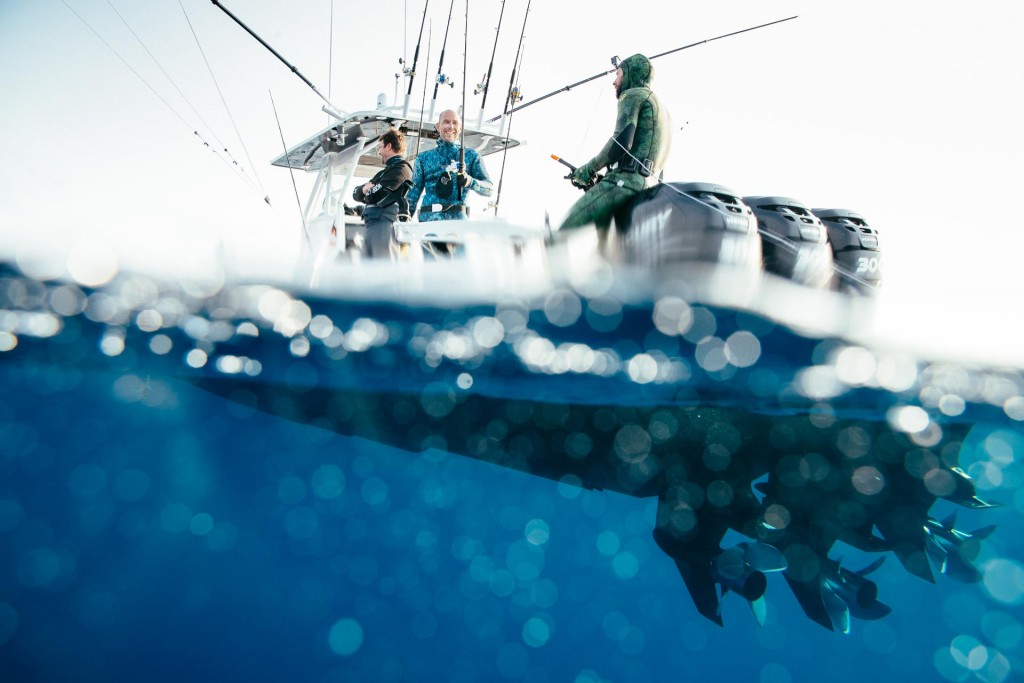 While Vancouver Island’s adventure community is growing fast, the people who are actually out there in the blue water diving with dolphins and eating raw tuna are few and far between. A small tight-knit crew of freedivers and fishermen, the crew on this trip was Galyn Franklin, Jeremy Koreski, Willie Mitchell, Jason Bertin of Atleo River Air Service, and Mick Sheinberg of Spearfishing Canada. The crew who dives together feasts together. 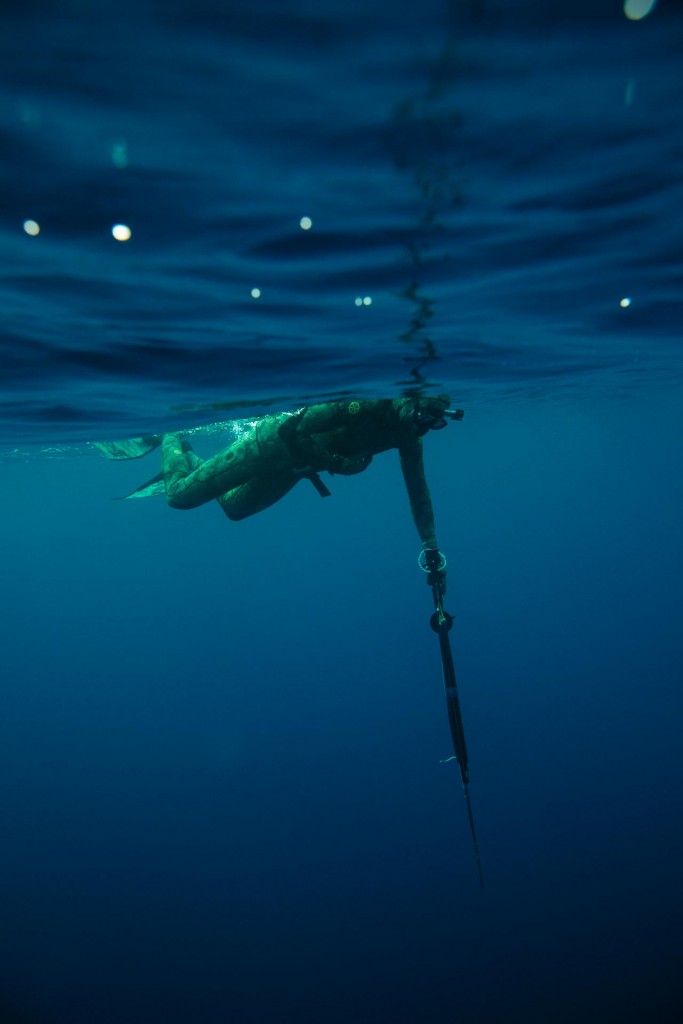 Bluewater is different. It’s warmer, which attracts tuna, mola mola (sunfish) and dolphins. Sharks are everywhere, but not nearly as dangerous as most believe.  In fact, there’s never been a confirmed shark bite, let alone a fatality, on the west coast of B.C. There was an awesome attempt though, way back in Vancouver in 1905. Either way, with water this warm and clear the view goes on forever, but that doesn’t make it easier to shoot a tuna. 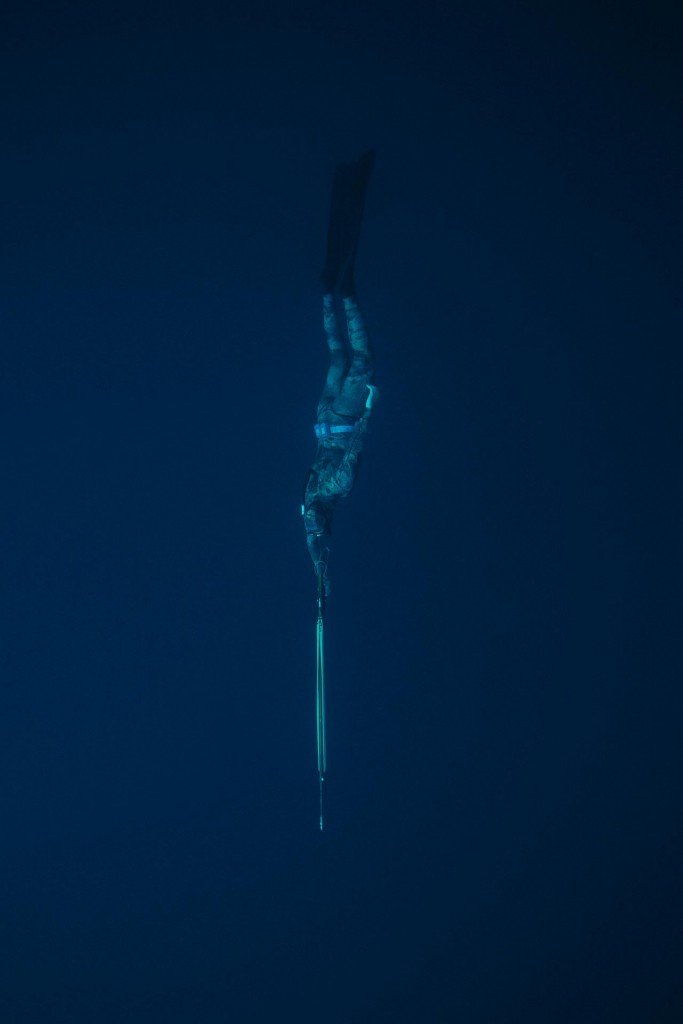 Certain fish like certain depths. Mick Sheinberg (pictured) dives to his own depth powered only on one held breath. Tuna are renowned for three things: speed, diving deep, and being tasty as heck. “You have to go running off shore until you hit that specific temperature,” says Franklin. “And then pretty much set the gear, but the depth drops off like 10 miles out.” This is where the tuna gather, and they come up from the depths to feed at the surface. Fishing boats, both commercial and sport, look for tuna “boils”, disturbed water where the schools have gathered. But whereas boats with nets or lines can speed towards the schools and catch a bunch, spearfishing requires stealth and patience, both hard to come by when you come in hot with a boat full of neoprene-clad warriors moving fast and loud. 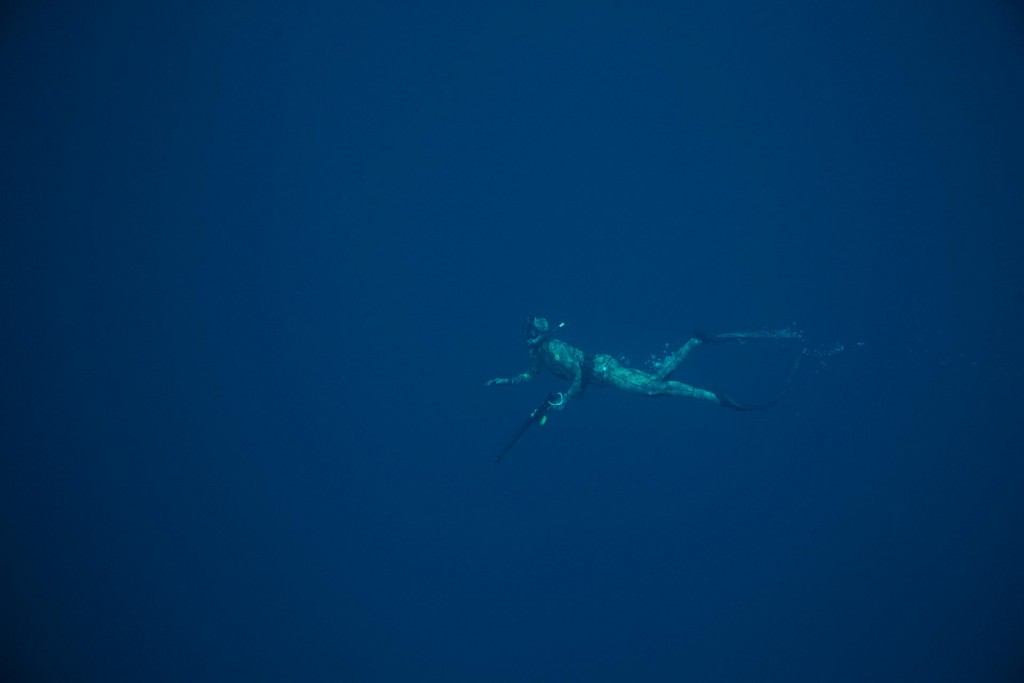 Be Quiet. Be Patient. But Also Be Fast.

In the photo above, Galyn Franklin uses his years of dive training and practice to try and sneak up on tuna, a difficult task when approaching off a powerful boat like King Size. “You only have, like, 20 seconds from the time you get off the boat until you lose your chance.” says Franklin. “I had one fish just happened to swim right across in front of me.” He missed his chance, thinking he’d have more. But no more came. Such is the art of hunting. 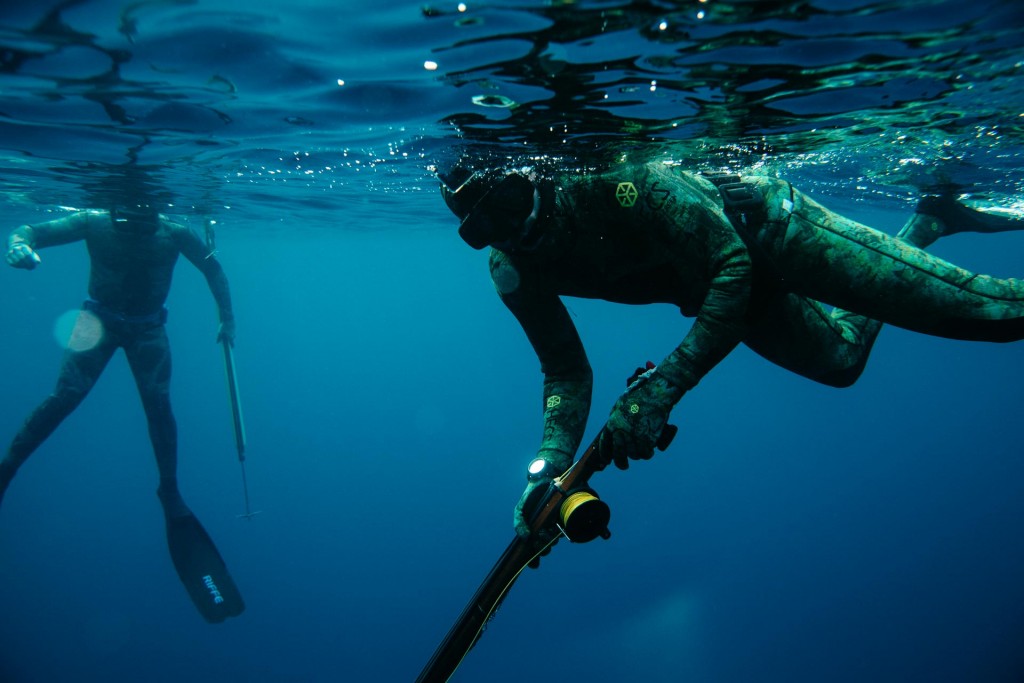 “When you’ve learned to spearfish in green water, you’re usually shooting stuff closer,” says Franklin. “It’s often up against a backdrop of rock or reef. Then you’re offshore and it’s got blue infinity behind it. It totally weirds out your depth perception. You have to relearn where you’re aiming. You think something is completely within range…but you just watch your spear drop underneath when you realize the fish was ten feet farther out than you thought it was.” 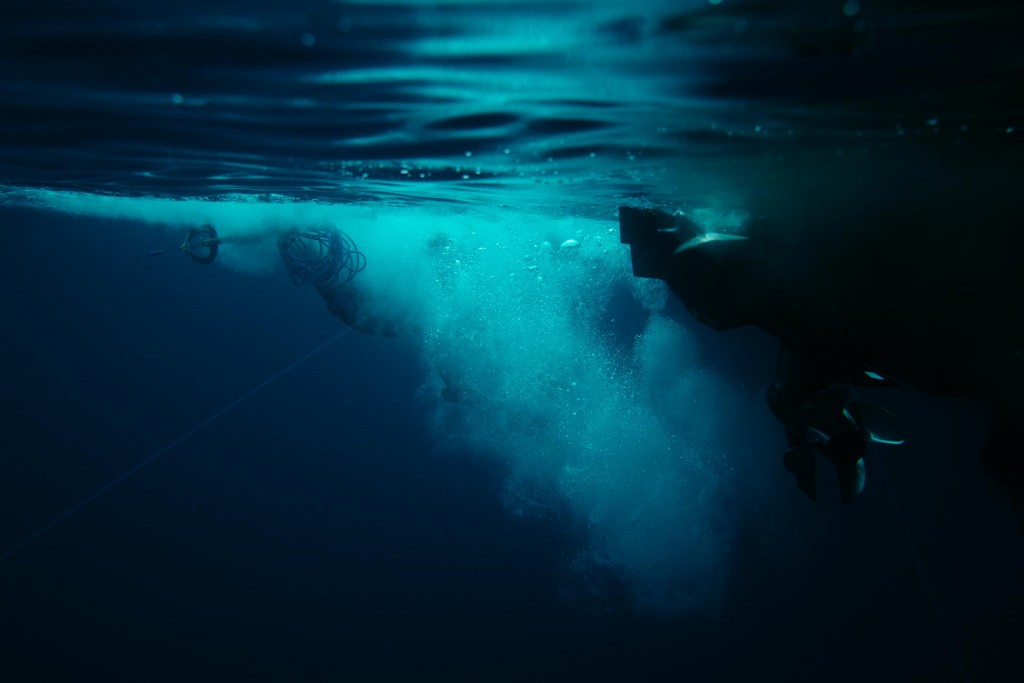 Going offshore takes commitment…and a big dependable boat. As a result, few sportfisherman venture beyond the comfort zone. Not Willie Mitchell and his trusty vessel, King Size, named after the two Stanley Cups he won while playing with the L.A. Kings. “Willie’s got so many days out there.” Says Franklin. “The guy’s an absolute expert at knowing what the tuna like. He’s definitely clearly one of the best in the country.” 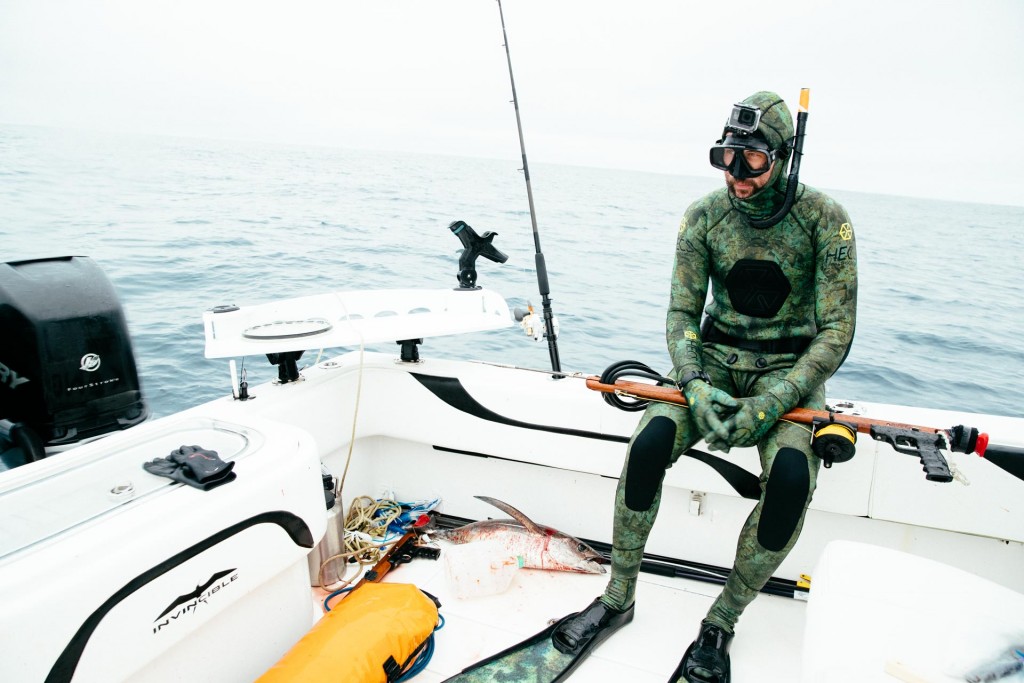 Galyn Franklin sits on the port side of King Size, waiting for the next chance to jump in after some tuna. The one on the deck was caught via sturdy rod and specialized reel, an approach that is not easy in itself. Sport tuna fishing is difficult, expensive, and time-consuming. Long days on the water, big boats, deep fuel reserves and a specific skil lset mean only a few hardy and determined anglers can become truly experienced at it. Tuna spearfishermen is an even more exclusive group, pictured in this photo. 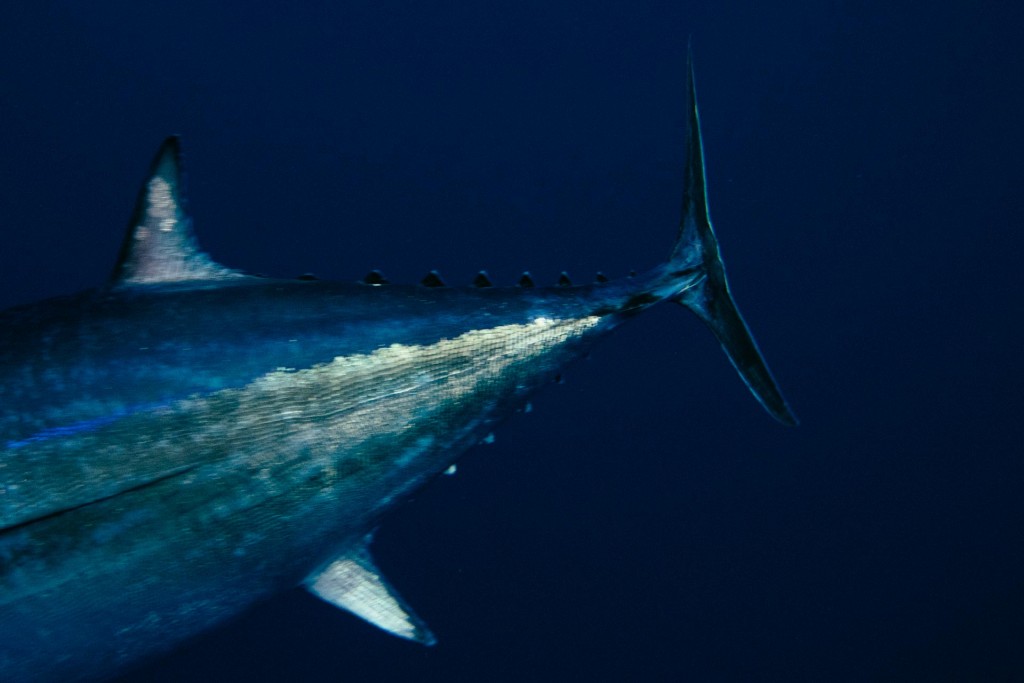 Close Encounters of the Tuna Kind

The one that got away. Classic. 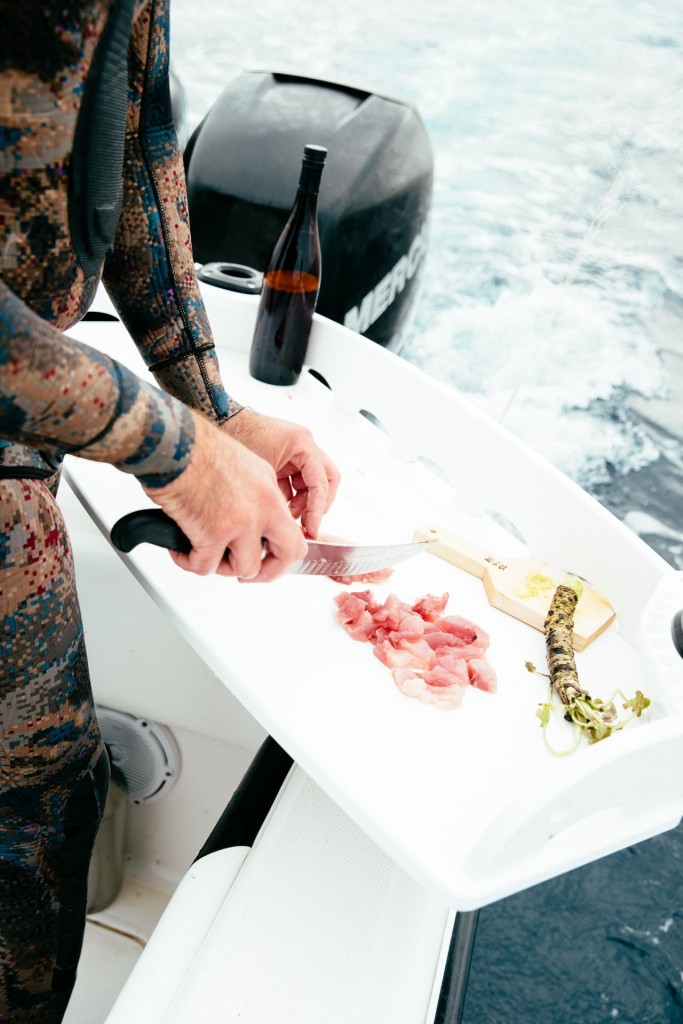 Just because you didn’t score doesn’t mean you can’t eat well. A bit of line-caught tuna, some fresh wasabi and cold beer goes a long way in assuaging defeat. “We’re rookies out there when it comes to spearfishing tuna.” says Franklin. “That’s just the fact of it. We learned a lot during this day. I’m pretty sure if we put two days in consecutively and try different times of the year when there are bigger bodies of fish we can probably score for sure.”

Jeremy Koreski was born and raised in the coastal Canadian town of Tofino, British Columbia. He began taking photographs at age 13 when his father, a local oyster farmer, gifted him a Canon AE1 camera. Jeremy is an assignment photographer who focuses on sport, wildlife, nature and culture in and around the wilds of the Canadian coastline. From remote surf breaks to wild mountain ranges, Jeremy’s commercial and editorial work has been featured internationally by The New York Times, Surfer’s Journal, Patagonia, Yeti and many more. In 2015, he released ‘This is Nowhere’, a hardcover book created in honour of life on the west coast, in hopes of demonstrating the importance of preservation for future generations. After participating in exhibitions across Canada, the US and Europe, Jeremy’s photographs now enjoy a permanent home in the recently opened Jeremy Koreski Gallery, in the heart of Tofino.